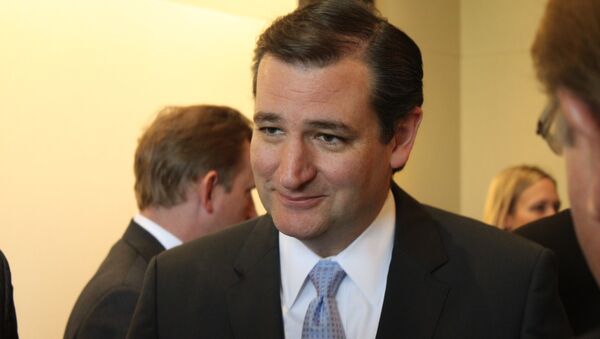 © Flickr / Austin Chamber
Subscribe
The Center for Western Priorities Advocacy Director Jessica Goad said that a bill put forward by US Senator Ted Cruz that would open all US federal lands to oil and gas drilling while speeding up the permitting process is a gift to the oil industry and is problematic.

WASHINGTON (Sputnik) — A bill put forward by US Senator Ted Cruz that would open all US federal lands to oil and gas drilling while speeding up the permitting process is a gift to the oil industry and is problematic, the Center for Western Priorities Advocacy Director Jessica Goad told Sputnik.

"Senator Cruz's legislation is nothing more than a gift to the oil industry and a solution in search of a problem,” Goad said on Thursday. “He completely fails to acknowledge the reality that oil production on public lands is up significantly.”

Under the proposed legislation, energy development on federal lands would be expanded by providing US states the option of leasing, permitting and regulating oil and gas on federal lands, including off-shore resources.

The bill would also streamline permitting processes on federal lands, requiring a decision to allow an oil or gas company to drill within 30 days.

Moreover, the bill would erode the power of the US Environmental Protection Agency (EPA) to regulate greenhouse gases, prevent the EPA from implementing some coal and power plant regulation, and require the US Congress to approve of any EPA regulations that have an impact on jobs.

Goad pointed out that oil production on public lands is already up by 40 percent since 2003, and nearly 749,000 acres of public lands were leased out in 2014.

Meanwhile, the oil and gas industry already has some 6,000 approved drilling permits.

“The truth of the matter is that the oil industry is pumping so much oil that it has worked itself out of a job — and raiding our national public lands won't help solve this problem that the industry has created for itself," Goad said.

Public lands in the United States are primarily used and managed for recreation, preservation and natural resource extraction. The US federal government owns 28 percent of all land.