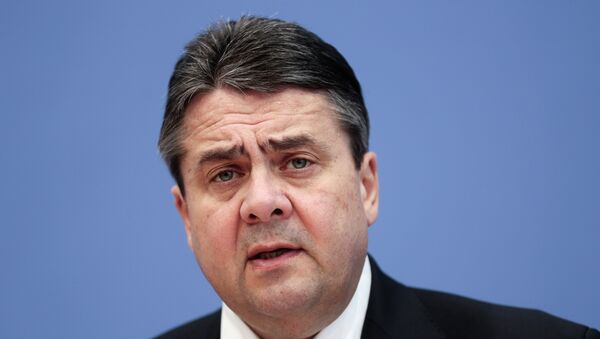 © AP Photo / Markus Schreiber
Subscribe
The United States threatened to cease sharing intelligence with Germany if Berlin offered asylum to National Security Agency whistleblower Edward Snowden or even arranged for him to travel to that country, according to German Vice Chancellor Sigmar Gabriel.

“They told us they would stop notifying us of plots and other intelligence matters,” Gabriel was quoted as saying by the Intercept.

Among the documents leaked by Snowden was evidence that the NSA targeted German Chancellor Angela Merkel’s personal cell phone – a revelation that was a major hit to US-German relations.

Gabriel, while delivering a speech in Hamburg this week, praised journalists who worked on the Snowden case, and said he regretted that Snowden was forced to seek refuge in “Vladimir Putin’s autocratic Russia” because no other country would welcome him or could prevent US authorities from arresting him.

That prompted an audience member to interrupt Gabriel’s speech and yell out: “Why don’t you bring him to Germany then?” according to journalist Glenn Greenwald, who attended the event and whose website, the Intercept, has published many Snowden-leaked documents. Gabriel responded by saying that Germany would be legally obligated to extradite Snowden to the US if he were on German soil.

Greenwald, however, claims that after the event, Gabriel disclosed to him that Germany would have been “cut off” from all US intelligence sharing if Berlin welcomed Snowden.

According to Greenwald: “That would mean, if the threat were carried out, that the Americans would literally allow the German population to remain vulnerable to a brewing attack discovered by the Americans by withholding that information from their government.”

This is not the first time the US has threatened to withhold intelligence from an ally. In 2009, a British national, Binyam Mohamed, sued the United Kingdom government for complicity in his torture at Bagram and Guantánamo. The High Court ordered the UK to provide Mohamed’s lawyers documents reflecting what the CIA told British intelligence about Mohamed’s abuse.

The UK insisted that the High Court reverse that ruling because it endangered the safety of British subjects, saying that the US would stop sharing intelligence – including evidence of terror plots – if they disclosed what the Americans had told them about Mohamed’s treatment. Lawyers even produced a letter from an unnamed Obama official laying out that threat.

Greenwald points out, however, it is entirely plausible that the US and UK conspired in that case to fabricate a “threat” solely to get the High Court to vacate its ruling – even producing the aforementioned letter.

In the case of Germany, Greenwald asserts that “one of two things is true: 1) the US actually threatened Germany that it would refrain from notifying them of terrorist plots against German citizens and thus deliberately leave them vulnerable to violent attacks, or 2) some combination of high officials from the US and/or German governments are invoking such fictitious threats in order to manipulate and scare the German public into believing that asylum for Snowden will endanger their lives. Both are obviously noteworthy, though it’s hard to say which is worse.”