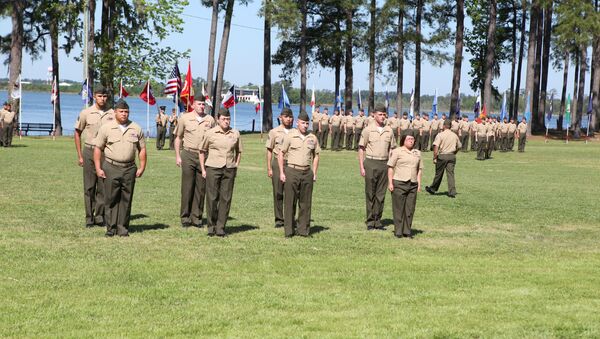 Russian Deputy Defense Minister Anatoly Antonov explained the nature of the Russian snap combat readiness drills which began on Monday, contrasting them with the upcoming US exercises, which he compared to a "Boy Scout March."

"More than anything, they organize some sort of Boy Scout marches, or as we call them, pioneers, who go around with suspenders on and carry colorful flags."

US Tanks, Troops Arrive in Estonia for Joint Military Drills
On Saturday, following "Hedgehog 2015" (Siil 2014) exercises in Estonia, which are part of NATO's Operation Atlantic Resolve, the US military plans to begin its "Dragoon Ride," a 1,700 kilometer road march across six countries, from Estonia to Germany. The road march will involve 150 soldiers and officers from the 3rd Motorized Infantry squadron of the 2nd US Cavalry regiment. Over 40 vehicles, including 20 Stryker IAVs will be part of the kilometer-long armored column, and the Strykers alone will consume around 15,000 liters (4,000 US gallons) of fuel.

Antonov contrasted the exercises and resultant march to Germany with Russia's combat readiness drills which began in the country's Western and Central Military Districts on Monday:

"This is not a clanging of tank treads, or a rattling of sabres, or a flexing of muscles. We don't act like some countries, which cockily demonstrate their strength at Russia's borders, transferring their personnel, armaments and equipment to foreign territory."

"It is important that drills of this sort become a routine part of the Army and Navy's existence. These sorts of drills will be continued in the future."

Over 700 Russian Paratroopers Conduct Drills in Pskov – Defense Ministry
On Monday, the Russian military began snap combat readiness drills involving the Northern Fleet, the Western Military District and the Russian Airborne Forces. The drills, which involve around 80,000 troops, as well asthousands of units of ground military equipment, dozens of ships, submarines, planes and helicopters, are scheduled to end on Saturday.
Newsfeed
0
New firstOld first
loader
LIVE
Заголовок открываемого материала
Access to the chat has been blocked for violating the rules . You will be able to participate again through:∞. If you do not agree with the blocking, please use the feedback form
The discussion is closed. You can participate in the discussion within 24 hours after the publication of the article.
To participate in the discussion
log in or register
loader
Chats
Заголовок открываемого материала
Worldwide
InternationalEnglishEnglishMundoEspañolSpanish
Europe
DeutschlandDeutschGermanFranceFrançaisFrenchΕλλάδαΕλληνικάGreekItaliaItalianoItalianČeská republikaČeštinaCzechPolskaPolskiPolishСрбиjаСрпскиSerbianLatvijaLatviešuLatvianLietuvaLietuviųLithuanianMoldovaMoldoveneascăMoldavianБеларусьБеларускiBelarusian
Transcaucasia
ԱրմենիաՀայերենArmenianАҧсныАҧсышәалаAbkhazХуссар ИрыстонИронауОssetianსაქართველოქართულიGeorgianAzərbaycanАzərbaycancaAzerbaijani
Middle East
Sputnik عربيArabicArabicTürkiyeTürkçeTurkishSputnik ایرانPersianPersianSputnik افغانستانDariDari
Central Asia
ҚазақстанҚазақ тіліKazakhКыргызстанКыргызчаKyrgyzOʻzbekistonЎзбекчаUzbekТоҷикистонТоҷикӣTajik
East & Southeast Asia
Việt NamTiếng ViệtVietnamese日本日本語Japanese中国中文Chinese
South America
BrasilPortuguêsPortuguese