Most of Frankfurt Anti-Austerity Protest Injuries Inflicted by Tear Gas 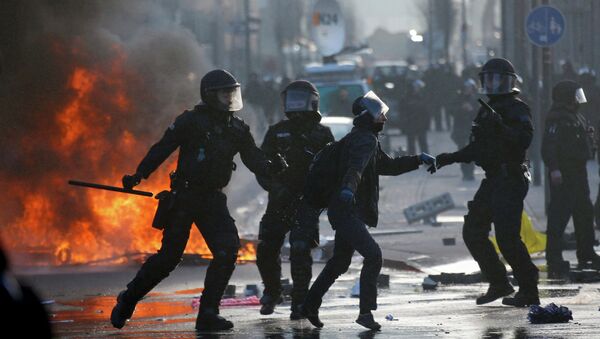 © REUTERS / Kai Pfaffenbach
Subscribe
Under 100 people were injured by tear gas and when falling down. All who needed medical help were to hospitals, the Frankfurt Fire Department told Sputnik.

Earlier in the day, a spokeswoman for Blockupy activist group that organized the protest said that Frankfurt police used tear gas grenades and water cannons as it attempted to disperse the anti-austerity crowd.

"Main injuries are from tear gas, and someone was injured when falling down," the spokesman for the Fire Department, which is responsible for emergency rescue operations, said. There have been no serious injuries, he added.

Frankfurt Police Ready for Any Development of Anti-Austerity Protests
The exact number of injured is still unknown, but stands under 100 so far, the spokesperson specified. All who needed medical help have been taken to hospitals.

Earlier on Wednesday, somewhere from hundreds to thousands of protesters, according to officials and Blockupy, gathered ahead of the opening of the $1-billion European Central Bank headquarters in Frankfurt to protest the European Union's austerity policies.

Additional demonstrations are expected to take place in the city later in the day.