Irish Ministers Use Taxpayer Pot of Gold to Travel in Style 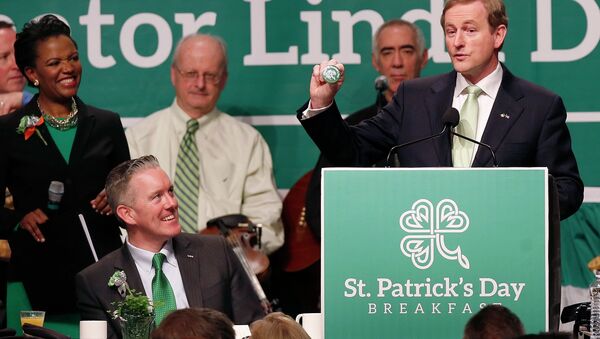 © AP Photo
Subscribe
The bill for Ministerial trips abroad between 2011 and 2014 has been exposed by The Journal in Ireland. Flying in jets, hiring limousines and staying in hotels across America to celebrate St. Patrick's Day has cost the Irish tax payer €705,050.

Green-Light the Leprechauns, St Patrick Is in Town

The single most expensive trip to celebrate Paddy's Day was when Enda Kenny flew to the United States in 2013. The Taoiseach and his staff's jet, limousine and hotel arrangements amounted to €142,304 — with the Gulfstream jet alone costing €110,400.

The cost of photographing Enda Kenny's St Patrick's Week in America in 2013 amounted to €2,236, however it did include a snap of him and US President Barack Obama.

The details of the costs, obtained by The Journal, show that Kenny and his entourage spent €2,656 on hiring a limousine for one day in Seattle, and €9,259 on hotels in Manhattan and San Jose. His staff, stayed in consular accommodation in those cities.

REVEALED: The single most expensive St Patrick's Day trip in the life of the government so far http://t.co/7UIr12qc42 pic.twitter.com/jdhuYC7Y3I

There was also an extra cost of €593 to fly the Taoiseach's wife home a few days earlier from Washington than the rest of the group.

Department of Finance guidelines generally forbid first class plane seats and encourage where possible, that ministers and staff stay at Irish embassies and consulates, rather than hotels.

How the cost of St Patrick's Day ministerial trips went up, went down and went back up again http://t.co/RV2UGECuTR pic.twitter.com/emcOtow9Ec

However, research by the Irish Journal suggests that these rules are not being followed. Money is being spent by ministers and their staff on hotel rooms, even when consular accommodation is provided, as well as business-class, long-haul plane tickets.