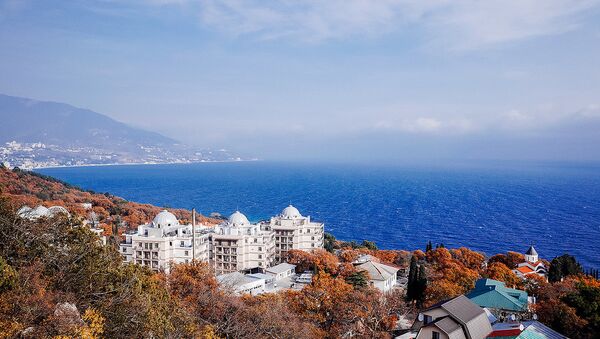 © Flickr / ilya
Subscribe
The US Department of State said that the sanctions against Russia over Crimea will remain in force until the peninsula is returned to Ukraine.

Crimea Blockade to Continue Until It Becomes Part of Ukraine - US Senators
WASHINGTON (Sputnik) — US sanctions imposed against Russia because of Crimea’s reunification with Russia will continue until the peninsula returns to Ukraine, the US Department of State said in a release on Monday.

“This week, as Russia attempts to validate its cynical and calculated ‘liberation’ of Crimea, we reaffirm that sanctions related to Crimea will remain in place, as long as the occupation continues,” the statement read.

March 16 marks one year since the Crimea seceded from Ukraine and became a part of Russia after more than 96 percent of local voters supported the move in a referendum.

Moscow has repeatedly stressed that sanctions are counter-productive and hurt not only the target country but those imposing the sanctions as well.

On Monday, Washington reiterated its condemnation of the Crimean referendum, claiming it was “not voluntary, transparent, or democratic.”

“We do not, nor will we, recognize Russia’s attempted annexation and call on President Putin to end his country’s occupation of Crimea,” the State Department stated.

The State Department also accused Russia of human rights violations in Crimea over the last year, including “mounting repression of minority communities and faiths, in particular Crimean Tatars, and systematic denial of fundamental freedoms."

“Local residents have been detained, interrogated, and disappeared and NGOs and independent media have been driven out of the peninsula,” the release added.

Crimea's secession from Ukraine took place after a coup installed a new, fiercely nationalist government in Kiev in February, 2014, which in turn alienated Crimea's majority Russian-speaking population of some 2.4 million. Crimea refused to recognize the legitimacy of the new government in Kiev, voting instead to cut ties with Ukraine and rejoin Russia.

Russian President Vladimir Putin signed a reunification treaty with the Crimean leaders on March 18. The signing launched an integration process that took almost a year, with Crimean voters going to the polls for the first time in September to elect their parliaments and local authorities.

Although the West refuses to recognize the results of the referendum calling Crimea's secession an "annexation," Putin has stressed that it was held in full compliance with democratic procedures and the rules of international law.