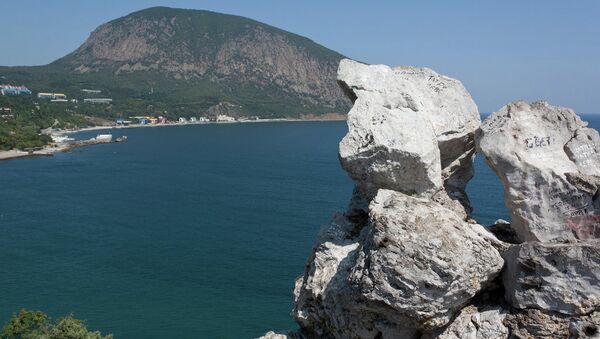 After a year since Crimea's reunification with Russia, Crimeans do not regret their choice, seeing numerous positive changes and realizing new ambitious projects.

Ekaterina Blinova — A year has passed since Crimea's reunification with Russia: a rapid integration of the peninsula into Russia's economic and political fold brought positive changes to the lives of Crimeans and set new important tasks.

Crimea Left Ukraine for Good – Crimean Head
Crimea has overcome numerous obstacles of a transition period and become an integral part of political, social and economic system of Russia. Civilians of the peninsula, who almost unanimously voted for re-unification with the Russian Federation last year, have not regreted their choice: the latest poll conducted by the Russian Public Opinion Research Center (VCIOM) indicated that more than 90 percent of Crimea's respondents would have supported Crimea's return to Russia in a repeat referendum. Analysts underscored that the rapprochement process proved effective due to an enthusiasm of Crimea's population which contributed highly to its success.

Analysts stress that Crimea's economy is gradually improving: the peninsula's infrastructure was allowed to fall into disrepair over the last two decades is being reconstructed; a free economic zone established by Russia in Crimea is bearing its positive fruit, despite severe hardship inflicted by Western sanctions as well as the hostile actions of Ukraine's authorities targeting the peninsula. Pensions and wages of Crimea's civilians have been raised, while a healthcare sector and education system of the peninsula have faced major changes.

Free Healthcare and Growth of Wages

Europe After Russia-Crimea Reunification: End of Outdated Security System
Crimea's reunification with Russia brought certain positive changes in the peninsula's healthcare system. First and foremost, civilians have gained an opportunity for free health care, which was inaccessible for Crimea's patients under Ukrainian rule. Crimean Deputy Prime Minister Alla Pashkunova revealed that lots of elderly people could not afford proper medical care, while some of gravely sick patients were truly doomed.

Today, the situation has improved significantly, Alla Pashkunova underscored, pointing to the fact that Crimea's civilians, including pensioners are currently receiving healthcare services and medicine for free. In 2015, Crimea's authorities will spend over three billion rubles ($50 million) on hospital modernization, according to the official.

At the same time, Crimeans' pensions and wages have been increased, outstripping considerably below average payments and salaries received by pensioners and workers in Ukraine. Analysts point out that unemployment rates in Crimea has also declined steadily.

Russia Marks First Anniversary of Crimean Referendum
Russia is investing into Crimea's infrastructure and building industry. Most of Crimea's resort facilities, roads, railways gas pipelines need to be rebuilt: the Soviet legacy and invaluable historical heritage of the peninsular were allowed into decay and disrepair by former Ukrainian authorities. So far, the Kremlin vowed to restore and expand Crimea's infrastructure in order to transform the region with its mountain scenery and subtropical climate into modern and well-equipped vacation zone.

A government order, published in January 2015, named Stroigazmontazh (SGM) as the contractor and stated that the project ought to be completed no later than December 2018. According to some estimates, the bridge's cost will reach $3.3 billion. New transport infrastructure will help Crimea's inhabitants to deal with the issue of the "transport blockade" imposed by Kiev in response to Crimea's decision to secede from Ukraine.

Simultaneously, Crimea's authorities are developing the scheme of uninterrupted water supply to the region. The problem emerged last year after Kiev shut down the North Crimean Canal which carried water from the Dnepr to Crimea (the peninsula receives 85 percent of fresh water through the canal).

Putin Reveals Details of Russia-Crimea Reunification, Maidan in Documentary
For several decades Crimea's national question remained unresolved. In 1944, the Crimean Tatars along with other national minorities, including Armenians, Germans, Greeks and Bulgarians were accused of treason and exiled from their native land to Central Asia and the Urals.

Although many of them returned to Crimea after the collapse of the Soviet Union, they were neither reintegrated by the Ukrainian government nor granted any special status.

Predictably, Kiev was repeatedly faced with protest rallies held by Crimean Tatars as well as illegal land seizures. After the peninsula joined the Russian Federation Vladimir Putin signed a decree officially reintegrating the Crimean Tatars and other ethnic minorities on the peninsula. The reintegration set the base for further improvement of living conditions of Tatars locked in old land disputes as well as other formerly repressed peoples.

Remarkably, the Tatar language became one of the official tongues of the peninsula and almost 99 percent of Crimean Tatars have already received Russia's passports, according to Crimea's Deputy Prime Minister Ruslan Balbek.

Russia Marks First Anniversary of Crimean Referendum
Over the last year Crimea has become a military stronghold of the Russian Federation: the Black Sea Fleet stationed in Sevastopol has been modernized with the new ships and submarines. In accordance with a Russian Federation Defense Plan, the Black Sea Fleet will receive six Admiral Grigorovich-class frigates and six Varshavyanka-class submarines in 2015-2016 as well as other vessels and weaponry, increasing the combat capabilities of Russia's Navy forces in Crimea.

Despite the large-scale anti-Russian campaign launched by the West after the historic Crimean referendum, which called upon nations to isolate the peninsula and impose sanctions on Russia, prominent experts and politicians supported the Crimean independence movement. Referring to the Kosovo secession precedent Russian and Western political analysts and jurists pointed out that Crimeans obviously had the right to declare independence from Ukraine.

Other experts noted that Russian President Vladimir Putin was obligated to respond to hostile actions of the US-backed Kiev's junta which targeted Russian-speakers in Ukraine.

Nicolas Sarkozy, the former president of France underscored that Crimea could not be blamed for seceding from Ukraine and joining Russia, which protected Russian-speakers from Ukrainian nationalists.

Former Japanese Prime Minister Yukio Hatoyama who visited Crimea in the beginning of March 2015 announced that discussions with local residents had convinced him that Crimea's referendum was a real expression of the will of Crimeans and added that more people should come to the peninsula and see the situation on the ground.