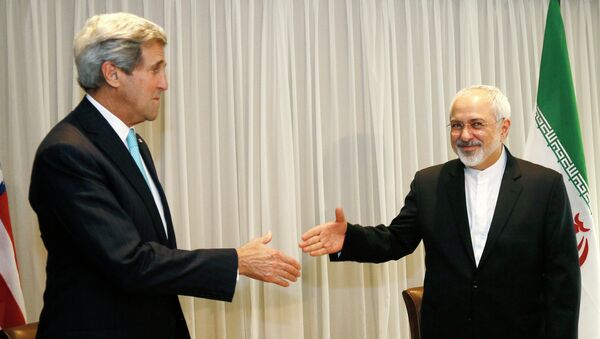 US Secretary of State John Kerry is expected to meet with Iranian Foreign Minister Mohammad Javad Zarif on Monday, March 16 to discuss the Tehran's nuclear program.

MOSCOW (Sputnik) – A meeting between US Secretary of State John Kerry and Iranian Foreign Minister Mohammad Javad Zarif, planned for Sunday, has been rescheduled to Monday, March 16, ahead of a crucial round of talks on Iran's disputed nuclear program.

Wheels down in #Switzerland for meetings with FM @JZarif as part of ongoing P5+1 nuclear negotiations. #IranTalks pic.twitter.com/9IlOTWrUhX

The US Secretary of State is expected to meet with Zarif at 08:00 a. m. local time (07:00 GMT) on Monday, with the meeting being the latest in a two-year effort to ensure that Tehran's nuclear program serves a peaceful purpose and is not a cover for the development of nuclear weapons.

On Saturday, Kerry said the P5+1 group of international negotiators reached some progress in talks on Iran's disputed nuclear program.

The P5+1 group, which includes the United States, Russia, China, France, Germany and the United Kingdom, finished another round of negotiations with Tehran in the Swiss town of Montreux in the first week of March.

Iran and the P5+1 need to reach a political framework agreement by March 24. Despite certain progress noted by the P5+1 delegates throughout the past weeks, Obama has extended sanctions against Iran, which the West suspects of developing nuclear weapons, into the next year.