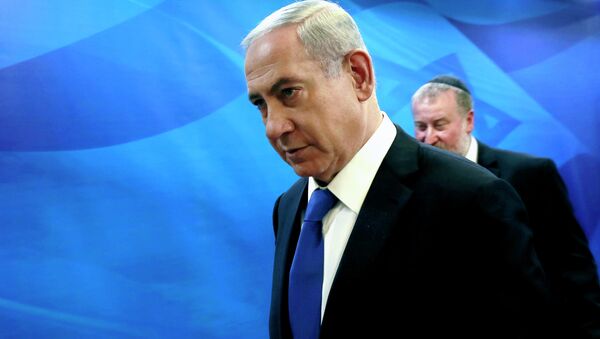 © REUTERS / Gali Tibbon/Pool
Subscribe
The US Senate is investigating the possibility that a US-based movement against Israeli Prime Minister Benjamin Netanyahu was funded by the US government, FOX News reported citing an anonymous source.

Bye-Bye Bibi? Netanyahu Faces Defeat, Polls Show
MOSCOW (Sputnik) — The Senate's Permanent Subcommittee on Investigations is looking into whether there was any wrongdoing when the OneVoice Movement has recently received $350,000 in State Department grants.

In various media appearances in recent days, Netanyahu has accused foreign governments of being "part of a worldwide campaign" to uproot him from power, without pointing the finger specifically at the United States.

"It's confirmed that there is a bipartisan Permanent Subcommittee inquiry into OneVoice's funding of V15," the source was quoted as saying by FOX News.

Facing Defeat, Benjamin Netanyahu Launches Media Blitz to Stay in Power
According to the broadcaster, V15 (Victory 15) announced in January its partnership with OneVoice, whose mission is to seek a two-state solution between Israel and Palestine. V15, according to the anonymous source, seeks to "replace the government" in Israel.

Additionally, around the same time the partnership between two grassroots movements was announced, US President Barack Obama's former deputy campaign director Jeremy Bird travelled to Israel to assist V15, according to FOX News.

An early general election in Israel is scheduled for Tuesday, March 17. The two main rivals are the largest parties – Likud, headed by Netanyahu, and the opposition Zionist Union, led by Isaac Herzog.

The last poll of the Israeli election campaign released on Friday showed the Zionist Union winning more seats in the Israeli parliament than Likud.