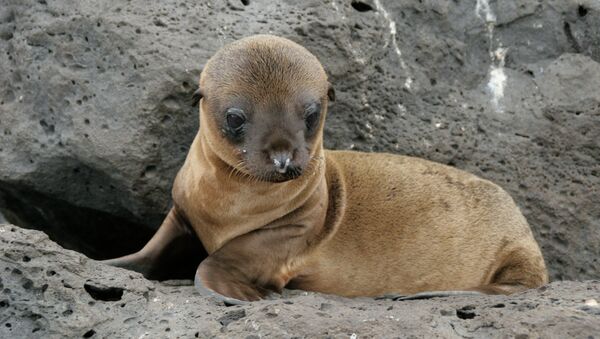 © Flickr / Michael R Perry
Subscribe
Rising ocean temperatures are blamed for changing the habitat of sea lions, more than 1,200 of whom have been found, starving and disorientated along California's beaches this year.

Rare Blainville’s Whale Sighting Off the Coast of Hawaii
Weather patterns which have warmed the Pacific Ocean habitat of sea lions are being blamed for a five-fold increase in the number of pups being washed up on beaches along its eastern shore, compared to the around 225 strandings that officials would expect to see between January and April.

In early March, the US National Oceanic and Atmospheric Administration [NOAA] claimed that more than 1,200 California sea lions had been admitted to rehabilitation facilities across the state, while the Marine Mammal Center in Sausalito said it has more of the animals at its hospital than ever before.

Last week it was announced that zoological employees from several animal parks in California had joined the effort to rescue and rehabilitate the pups, and the Sea World parks in San Diego and Texas have suspended their sea lion shows so that trainers could join the teams tending to the stricken animals. Sea World also said that it was in the process of constructing two temporary pools for the rescued sea lions.

"Each animal rescued is a puzzle piece to give us big-picture information on what’s happening in the marine environment and throughout the West Coast," said Justin Viezbicke, California’s Stranding Network Coordinator for NOAA Fisheries.

Remains of Giant Armored Sea Creature Discovered in Morocco
Experts from NOAA believe that the disturbing phenomenon is related to large swaths of warm water in the Pacific, caused by unusually weak winds from the north and strong winds from the south. According to NOAA climatologist Nate Mantua, some areas of the Pacific are two to five degrees Fahrenheit (3.6 to 9 °C) warmer than usual for this time of year, some of the warmest temperatures seen in history.

The resulting change in currents has led to a decline in the amount of cold water and fish, which usually come to the surface, making prey more plentiful and accessible. The mothers of the pups nurse their offspring on colonies off the coast of California for almost a year, but due to the lack of food, they have to travel further to find prey and leave their offspring for longer periods without sustenance. As a result, the pups are being forced to leave the colony to look for food themselves, before they are capable of being out on their own.