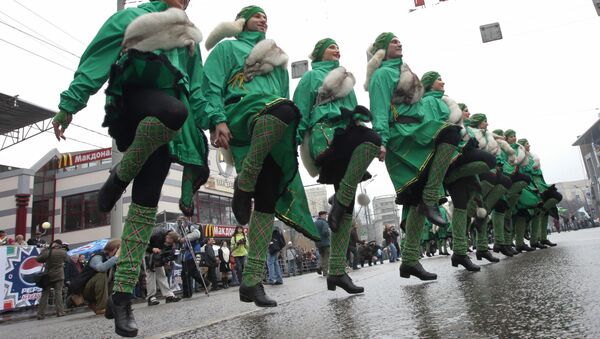 © Sputnik / Ruslan Krivobok
/
Go to the photo bank
Subscribe
The City of Moscow Agency for Parks and Recreation announced that a St. Patrick's Day parade will be held in one of the parks in the centre of the Russian capital on Saturday.

MOSCOW (Sputnik) – A St. Patrick's Day parade will be held in one of the parks in the centre of the Russian capital on Saturday, the City of Moscow Agency for Parks and Recreation (Mosgorpark) has announced.

"An Irish culture festival, Irish Week, will be held in Sokolniki Park as part of St. Patrick's Day celebrations," the Mosgorpark press service informed on Friday.

The yearly parade will start with a greeting from representatives of the Irish Embassy and the organizers of the event, which is expected to attract thousands of Moscow residents.

Homeless Man Sets Self Ablaze During St. Patrick’s Day Event
The participants in the parade are expected to wear something in the traditional St. Patrick's Day colour – green. There will also be make-up artists working at the entrance to the park, who can add some green to those who fail to find an appropriate piece of green clothing or accessory.

Irish musicians and street performers will be taking part in the parade, which will be followed by a concert of Russian-Irish music bands.

Saint Patrick's Day, traditionally celebrated on March 17, is an Irish holiday that commemorates Saint Patrick, who died on that day, and the arrival of Christianity in Ireland. Introduced in the early 17th century as a religious holiday, St. Patrick's Day has since become a general celebration of the Irish culture and heritage. The holiday has been especially popular with the Russian youth in the past few years.

Various cultural events, including an Irish film festival, are taking place in Moscow on March 11-22 as part of the Irish Week.