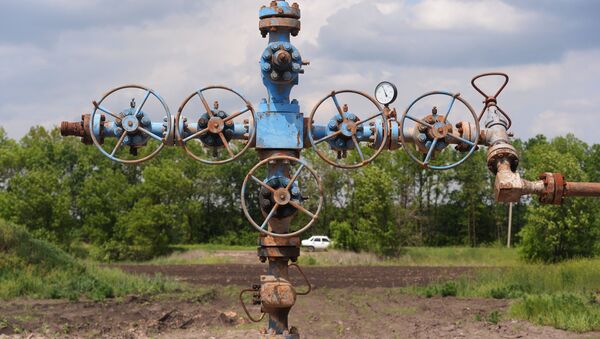 Romania’s Anti-Fracking Activists Cheer Chevron's Exit, Say Fight Not Over
Western oil and gas companies are abandoning their shale drilling plans in Ukraine, referring to a tremendous drop in oil prices and political instability in the country.

Royal Dutch Shell, an Anglo-Dutch multinational oil and gas company and Ukrgasdobycha, a subsidiary of Ukraine's Naftogaz, have announced they have stopped their work on a hydrocarbon exploration project in Kharkiv region. According to the official press release, published on Shell's website, Shell and Ukrgasdobycha completed all exploration activities in Belyaevskaya-400 and New Mechebylivska 100 in the Pervomajskiy and Bliznyukovsky districts, respectively, where the two wells were drilled.

During the first phase of the project, all necessary geological data was collected and analyzed scrupulously. However, after assessing the results of the exploratory phase, the sides came to the conclusion that the project was not economically expedient and terminated the contract, the press release said. According to Shell, the wells will be recultivated.

According to Valentin Zemlyanskiy, the former head of Naftogaz press service, the production cost of shale gas will reach up to $250 for one thousand cubic meters.

Prices to Plummet Again? US Running Out of Room to Store Oil
Furthermore, Ukraine's Verkhovna Rada has recently raised the rent on gas extraction from 20 percent to 70 percent, Zemlyanskiy emphasized. So far, shale gas production in Ukraine will become highly unprofitable, he concluded.

It is not the first time Shell has halted its projects in Ukraine. Last year the company suspended its works at the Yuzovskaya gas field in the regions of Kharkov and Donetsk. It was expected that Shell would invest almost $10 billion in the project. However, in 2014, the company refused to continue the work, citing security concerns over ongoing military operations in eastern Ukraine.

The US-based Chevron Corporation followed the example of Shell, halting exploration at Olesskoye field in the Lviv and Ivano-Franskivsk regions. Reportedly, the American company was planning to invest almost $5 billion in the project. Unlike Shell, Chevron explained that its decision resulted from the fact that the Ukrainian government failed to comply with its contractual obligations.

Zemlyanskiy stressed that the decision of Western companies to leave Ukraine's energy market is an alarming signal of Kiev's inability to legally protect the rights of Western investors and to establish peace in the country.