South Stream Has Been Resurrected Through Balkan Stream 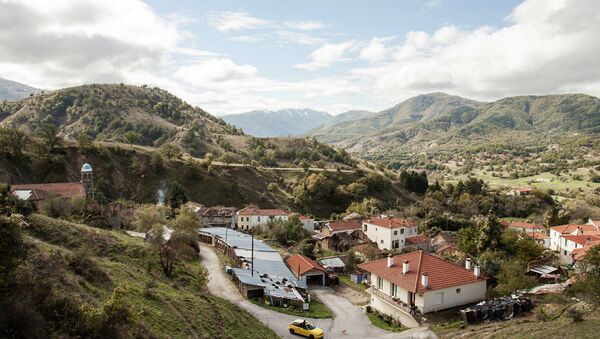 Andrew Korybko
All materials
As Russia begins to build a pipeline through Macedonia that could form the basis of a revised South Stream route, the Hungarian President is in talks with Erdogan over financing this enormous project.

Is Turkey Turning Towards A Full Eurasian Pivot?
While many in the Balkans were lamenting the cancellation of the South Stream project last December, Russia was hard at work laying the foundation for its replacement, hereafter referred to as ‘Balkan Stream'. The concept is to connect ‘Turkish Stream', the Russian pipeline to Turkey's Eastern Thrace region, to South Stream's previously intended Serbian, Hungarian, and Austrian partners, but detouring through Greece and Macedonia to compensate for the exclusion of Bulgaria. While such a strategy was previously only talk, concrete action was taken this week to transform it into a reality, which wouldn't have been possible had Macedonia not beaten back the Color Revolution attempt that aimed to sabotage the entire thing.

The whole reason that Balkan Stream was conceived in the first place was because its predecessor, South Stream, was cancelled last December. Russia took this decision after Bulgaria (influenced by the EU acting on behalf of the US) made it impossible to construct the pipeline through its territory due to a slew of political and legal games that it was playing. At the time, the author was the first person to write that a replacement route could realistically go through Greece and Macedonia, thereby resurrecting the project and fulfilling the pressing energy demands in Europe that necessitated its creation in the first place. Russia was quick to move, and in the same breath that it cancelled South Stream, it announced ‘Turkish Stream' to partially replace it. This pipeline will travel under the Black Sea just as South Stream was intended to, but would instead reach land at Turkey, not Bulgaria. From there, the Russian government said, European nations could buy gas from a terminal at the Greco-Turkish border, in what was interpreted as a vague hint that such purchases could either be LNG or possibly even the start of a brand new pipeline.

Midway through December, Putin officially suggested during his annual news conference that the Greek-Macedonian ‘detour' could represent a solution to South Stream's cancellation, provided that there was interest in his proposal. This was echoed by the Hungarian Foreign Minister in mid-January, when he said that his country would support the project. Interpreting this as a greenlight to move forward, Putin discussed the topic with Viktor Orban during the former's visit to Budapest last month. This week was the most monumental in terms of actually making progress on the project because Stroitransgaz, one of the companies involved in the original South Stream, announced on Thursday that it would be building a gas pipeline through Macedonia, which is set to begin construction this weekend and be completed by next summer.  That same day, the Hungarian President, while on a four-day visit to Turkey, spoke with Erdogan about a financing plan for the project, and a day afterwards, the Macedonian Foreign Minister paid an official visit to Turkey as well, where it is expected that he'll discuss the topic, too. Through these series of diplomatic steps, Balkan Stream made the jump from paper to practice.

This wasn't supposed to happen, at least not if the US had gotten its way in Macedonia last month. Understanding that it's the crucial bottleneck through which Balkan Stream must run, Washington wanted to stage a coup in the country in order to install a new leader that would reject the project and put an end to the region's plans for reliable energy transit. Nikola Gruevski, the Prime Minister of Macedonia, had earlier broke ranks with his EU partners by refusing to sanction Russia, in a show of rebellion that the US felt it had to absolutely put down. For the few past couple of years, it had contracted the services of former intelligence chief Zoran Verushevsky in order to illegally wiretap over 20,000 people in the tiny country of 2 million, including politicians, journalists, and regular citizens. When it became clear at the end of last summer that South Stream was being stonewalled by Bulgaria and a new route would likely have to be streamlined (which geography dictates would obviously have to go through Macedonia), it activated its intelligence cell in order to preempt these plans, just in case they would go forward sometime in the future.

Zoran Zaev, the leader of the opposition, was given copies of these illegal tapes in order to blackmail the government, which he attempted to do from September to November. When Gruevski refused to give in to the blackmail, Zaev threatened to go public with the wiretaps and accuse the government of carrying them out, alleging that they also contained embarrassing political information and insinuating that this would lead to a Color Revolution. At the end of January, the Macedonian security services finally arrested Verushevky and a few other conspirators for plotting a coup, and Zaev had his passport taken to prevent him from fleeing while the investigation was ongoing. Verushevsky's son even attempted to destroy his father's computer before police stopped him, yet authorities were able to access the salvaged hard drive and recover Skype conversations where Verushevky and another plotter even spoke of starting a civil war in the country as a result of the blackmail ‘revelations'.

Where's My Gas? EU Citizens Reveal How South Stream Cancellation Hits Them
While Zaev attempted to create an actual Color Revolution last month by encouraging people to amass in the streets and protest the government, he failed to garner a consistent and sizeable following, showing that most Macedonians saw through the gimmick for what it was — a Ukrainian-styled soft coup attempt. Taking matters further, both Albanian parties in the country (whose affiliates are estimated to possibly constitute a quarter of the population) loudly distanced themselves from Zaev, thereby diminishing the prospects of a return to the 2001 interethnic violence that rocked the country and could have set the stage for the civil war that the conspirators previously discussed.  Russia evidently feels that the combination of government action, Albanian loyalty, and popular support has finally stabilized the situation, since it would not have gone forward with the pipeline's construction through Macedonia had it thought that it could be endangered by the Color Revolution attempt. Accordingly, one can interpret this as Moscow's recognition that Washington's plot ultimately failed.

Despite the obvious failure of Zaev's destabilization, serious threats still remain that could endanger the viability of Balkan Stream. These mostly have to deal with the susceptibility of Hungary and Serbia to similar Color Revolution attempts (or a reoccurrence of instability in Macedonia), as well as the fragility of the Greek government. Also, a plan needs to be devised as to how the pipeline will comply with the EU's Third Energy Package (which mandates the separation of energy suppliers and distributors), as the failure to have done so was the ‘official ‘reason that South Stream was stonewalled last year. If these difficulties can be surmounted, which is entirely feasible, then Balkan Stream has the potential to enrich the region and ensure Europe's stable energy transit for decades to come.