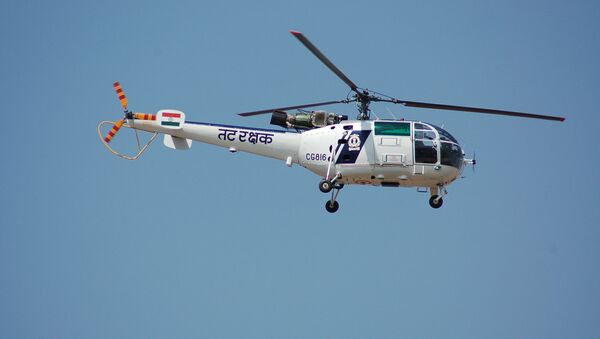 “During my meeting with the defense minister, I, on behalf of the Army Officers’ Wives, demanded that these vintage choppers should be phased out,” Bhosale said.

The meeting with Indian Defense Minister Manohar Parrikar lasted for about 25 minutes, and the minister listened patiently, she added.

“The Cheetah and Chetak helicopters are being used not only for army operations, but they are widely used in disaster and civilian relief operations as well,” Bhosale told Sputnik.

Russia Delivered 121 Mi-17V-5 Helicopters to India, Ready to Send More
The aircraft are outdated and India’s armed forces often face a shortage of spare parts, as France has stopped production, she said, adding that technical errors are the main cause of fatal incidents involving the helicopters.

“It is a serious matter and it cannot be taken lightly since the life of army officers is at stake,” Bhosale said.

Parrikar reassured her that the ministry is serious about the issue, and is trying to find a solution to the problem as soon as possible, she said.

However, it is necessary to find a replacement before phasing out the 175 outdated helicopters, the minister told Bhosale during the meeting.

In addition, Parrikar noted the need for a “separate and independent investigating agency for the investigation of crash incidents, and HAL [Hindustan Aeronautics Limited] should be not the part of that agency for a fair outcome,” Bhosale told Sputnik.

The French-designed Aerospatiale Alouette III helicopter was initially introduced in the 1960s and built under license in India as the HAL Chetak.

The Aerospatiale SA 315B Lama, license-built by HAL in India as the Cheetah, has been in service since the 1970s.

The French state-owned Aerospatiale firm has been defunct since 2000, when assets were transferred to what is now known as the Airbus group.