Iran's Leader Calls Senators' Letter a Sign of US Disintegration 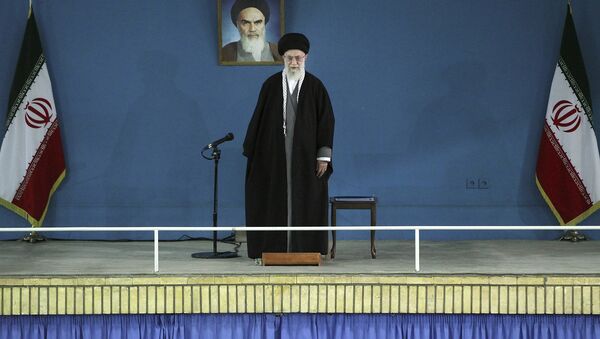 In an unprecedented move, US Congressional lawmakers threatened international negotiations by writing a letter directly to Iranian leadership. The message: Obama’s promises are no good. As diplomatic talks continue, Khamenei has expressed frustration with the bizarre move, which may have been the letter’s intent all along.

In a statement posted to his website, Ayatollah Khamenei called the letter sent by 47 Senate Republicans “a sign of a decline in political ethics and the destruction of the American establishment from within.”

“All countries, according to the international norms, remain faithful to their commitments even after their governments change, but the American senators are officially announcing that at the end of the term of their current government, their commitments will be considered null and void,” he wrote.

The correspondence was sent as “An Open Letter to the Leaders of the Islamic Republic of Iran,” and went on to warn Tehran that any deal made during the ongoing nuclear negotiations could be overturned once President Obama’s term ends.

Organized by Senator Tom Cotton and signed by all but seven Senate Republicans, the letter was condemned by both the White House and US Secretary of State John Kerry as “reckless”.

“Of course I am worried,” Iranian news agency, Mehr, quoted Khamenei as saying, “because the other side is known for opacity, deceit, and backstabbing. Every time we reach a stage where the end of the negotiations is in sight, the tone of the other side, specifically the Americans, becomes harsher, coarser, and tougher. This is the nature of their tricks and deceptions.”

Khamenei also expressed disappointment in the March 3 speech given by Israeli Prime Minister Benjamin Netanyahu. A similarly controversial move, Netanyahu had been invited to speak before the US Congress by House Republicans, and not by President Obama, as is customary.

Netanyahu warned that any Iranian negotiations would result in a “nuclear nightmare.” Khamenei responded by describing the prime minister’s comments as being made “by a Zionist clown.”

“Some American officials, who did not want to side with him, made some remarks, but they also accused Iran of terrorism,” he said. “America and its allies in the region have created the most evil and wicked terrorists like Daesh but accuse Iran of committing such acts.”

Perhaps owing to such a direct threat from US Republican leadership, Khamenei also reiterated a need for Tehran to diversify its economy, according to Mehr.

“If the country and economy were not dependent on oil revenues…could the enemy harm us with sanctions?” he said.

Despite these misgivings, Khamenei still seems hopeful that the negotiations can come to a worthwhile end. Talks between The US, Iran, and the other members of the P5+1 – China, Russia, Germany, and the UK – continue in Lausanne, Switzerland, next week. This next round of discussions could be critically important as the March deadline approaches. This deadline has been extended twice, already.

The negotiations seek to allow Tehran to expand its nuclear energy capabilities, while still ensuring that the country is not in pursuit of a nuclear weapon. The deal would also involve the easing of Western sanction against Iran.