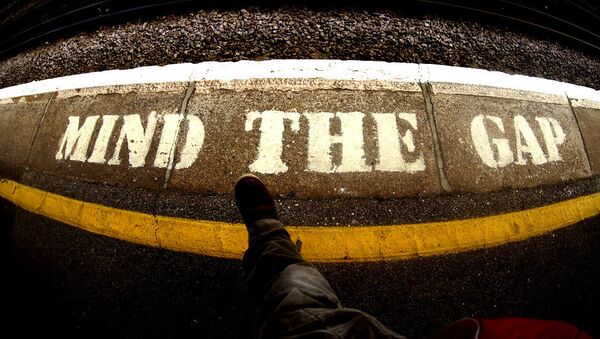 From bust to boom - the richest Londoners have emerged four times richer from the 2007 recession. Meanwhile falling incomes have hit the poorest people hardest as London's economic success since the crash has not been translated into lower inequality, according to a new report.

'Falling Behind, Getting Ahead: The Changing Structure of Inequality in the UK, 2007-2013', from the Centre for Analysis of Social Exclusion and London School of Economics, has examined the change in wealth distribution between 2007 and 2013.

The report found that by 2013, fewer than half of all working-age adults in social housing were in any kind of employment or self-employment. And for those tenants who were working full-time, hourly wages fell by eight percent for men, and nine percent for women; £8.48 and £7.77.

This is 40 percent below the wages of men and women with mortgages.

And it's not just about a gap between the rich and poor in London; the gap is growing between London and the rest of the UK.

According to the report, Londoners saw the most rapid increase in qualifications levels. By 2013, nearly half of Londoners of working age had a degree or other higher education qualification, compared to fewer than 30 per cent in Northern Ireland.

Britain's capital also experienced the smallest drop in the number of men in full-time work and the smallest increase in unemployment between 2006 — 2008 and 2013.  Low wages for men fell the most — by nine per cent — in London, and high wages by one of the least. Consequently, wage dispersion grew rapidly in London.

'Britain's divided decade:the rich are 64% richer than before recession, while the poor are 57% poorer' http://t.co/Pcc3X30Hip #inequality

Moreover, by 2012/13 the most well-off of Londoners earned above £1.027 per week after housing costs, while the poorest earned less than £113 a week; the lowest in the country.

This, according to the report, meant that income inequality was far greater in London than anywhere else in the country.

"The generation born in the 1980s did what was asked of it in gaining more qualifications, but has paid the greatest price through the crisis and is now earning much less than they might have expected."

The report also looked at wealth distribution amongst various ethnic groups and found that ‘Chinese and other' adults had greater income than any other ethnic group.

A higher proportion of white adults were employed than any other ethnic groups but Chinese and Indian households now have the highest wealth in the UK.

Mother of four, Kathleen Kerridge from Portsmouth, has just £45 a week to spend on food for her family of six. She thinks the hidden reality of 'working poverty' is hidden and misunderstood by politicians and the press in Britain.

"I think they mostly 'understand' the media portrayal we see on programmes such as 'Skint' and 'Benefit Street', with no real understanding of the day-to-day life many working families face in trying to meet the rent and make ends meet, week after week after week.

"I think the true hidden reality of 'working poverty' is very much hidden and misunderstood, simply because of the stigma and shame attached to it. If no one is speaking out, then how is anyone going to understand?"

According to Professor Hills, the future prospects of the 80s generation will be defined by the wealth of their parents and grandparents. "But that is very unequally distributed, and so will be who gets help and benefits from inheritance," Hill said.