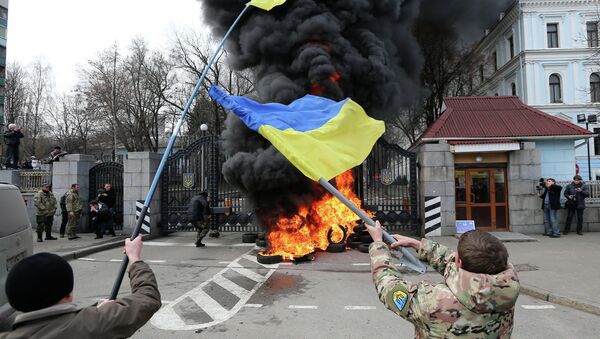 Commenting on the IMF's decision to provide Ukraine with a $17.5 billion loan package, Martin Sieff, columnist for the Baltimore Post-Examiner, argues that Western financial intervention into the Ukrainian economy is akin to throwing money down a "black hole."
IMF Signs Off on $17.5 Billion Ukraine Aid Program
In an interview for RT, Sieff notes that the $4.6 billion spent propping up the Ukrainian economy following last year's Maidan coup has had a minimal impact, merely "keeping Ukraine afloat in the short-term." The columnist notes that the present authorities head "a very weak disorganized government, it’s a black hole. The more money you pour in, the less effect you will have. You can keep it stable for a year or two but no longer than that."

Sieff argues that the fundamental reason for the present government's helplessness in economic matters is its illegitimacy: "This is an unconstitutional government in Ukraine which was really established by a violent coup in Kiev last year which has waged an aggressive war of repression against two secessionist provinces of its own country, which doesn’t have any real social contract with its own people."

The journalist notes that while the government of former President Viktor Yanukovich was accused of corruption and incompetence, "this government is far more corrupt than the previous government was and it’s infinitely more incompetent." Sieff again attributes this to what he says is a "lack of credibility of governance." He notes that the state's lustration measures against "anyone remotely accused or suspected of being efficient and loyal to President Yanukovich and his predecessors" only erodes efficiency and credibility more.

Ukraine to Spend Last of Its Money on New Arms – German Media
Sieff believes that if even "a year ago, the EU didn't have the resources by itself to lift up even a peaceful Ukraine under democratically elected governance, [the] prospects of doing that now under President Poroshenko and his war-government…are much less. So this would be $17 billion down the drain."

Ultimately, Sieff believes that Brussels and Washington cannot fix the problem they helped create. "Ukraine’s problems first of all have to be solved in the security sphere then they have to be solved in the political sphere restoring the political amity and credibility and the incompetent but nevertheless stable civil service that existed until February 2014 a year ago. It was the EU and the US that broke Ukraine and they cannot fix it now by simply pouring money into a black hole."