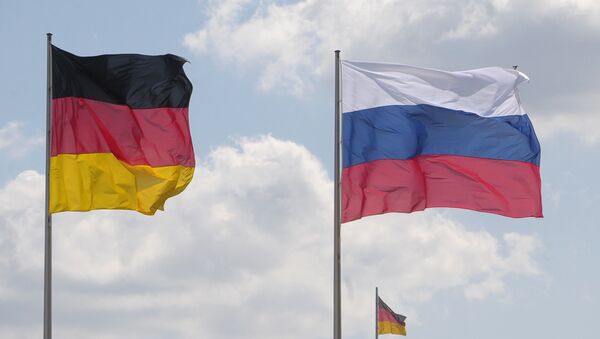 Russian and German scholars have unveiled a long-awaited middle-school textbook on the history of relations between Russia and Germany through the 20th century.

Ignoring Moscow Parade Means Offending Memory of Czech Liberators–President
The teaching text, called 'Russia and Germany: Moments of Common History in Collective Consciousness', is devoted to the most striking moments in the history of Russian-German relations. The book was unveiled Tuesday at the Berlin National Library, with a similar launch to be held in Moscow next month.

The textbook was released following more than a decade of collaborative consultation, conferences, writing, discussion and revision. Scholars from the two countries were organized by the Institute of World History of the Russian Academy of Sciences and the Munich Institute of Contemporary History. The text features 20 modules, 14 of them jointly written by German and Russian scholars. For the remaining 6 modules, among them the Molotov-Ribbentrop Pact, the Battle of Stalingrad, and the Berlin Crisis, scholars agreed to provide two articles, one by a Russian and the other by a German on each respective subject.

China and Russia to Jointly Commemorate WWII, Protect History
Alexander Chubaryan, Director of the Institute of World History and head of the Russian commission, told Russia's Rossiyskaya Gazeta that the collaborative project is a unique success: "There was an attempt on a collaborative effort by German and Polish scholars, but it failed. There is a German-French three volume text, but it is an academic work, not a textbook. For countries which have had such a tragic history of relations to write a joint textbook –this is a first."

"We tried to get away as much as possible from ideological judgments. After all, a textbook is not an official position, or a verdict, but the point of view of a group of Russian and German authors. I see it as an invitation for a broad dialogue on…historical memory, the memory of relations between the two largest countries in Europe, whose history is filled with both the positive and the tragic."

The joint textbook on the 20th century is the first and arguably most important of a three volume project on Russian-German comparative history; a project on the development of relations in the 18th century is set to be finished by the fall, with work also continuing on a text on the 19th century.

Russian scholars from the Academy of Sciences are presently working on similar projects with Polish and Austrian academics.