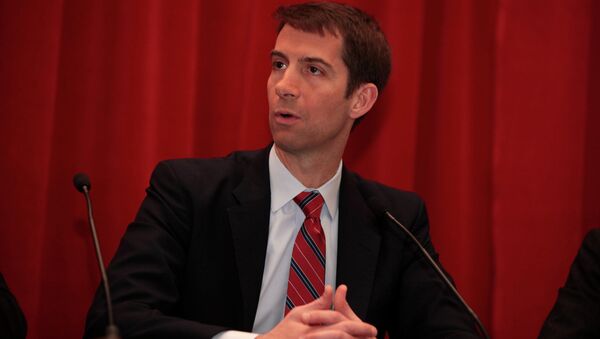 Freshman US Senator Tom Cotton is currently enjoying his 15-minutes of glorious, Republican fame after organizing the Congressional letter to Iranian leadership. But long before his heyday of mailing potentially illegal memos, Cotton had a different strategy for gaining prominence: warning the uninsured about Obamacare and the Russian mob.

It was a truly miraculous feat. A little-known Senator from Arkansas managed to rally some of the biggest names in politics – John McCain, Ted Cruz, even Senate Majority Leader Mitch McConnell – behind a hugely controversial plan to send Iranian leaders a Dear John. Don’t trust President Obama, the letter essentially said. I, Tommy Cotton, am the real man in charge here.

As Slate pointed out, the whole endeavor may constitute a felony under a US law which forbids “private correspondence with foreign governments.”

But back in 2013, Cotton was two years younger, and – believe it or not – even more desperate to stir-up controversy which could land him in the big leagues. While serving in the House of Representatives, Cotton held a town hall meeting in which he discussed the always divisive Affordable Care Act.

During this meeting, an uninsured constituent came forward with her concerns that Obamacare was untrustworthy, especially after the major technical glitches which plagued the exchange website.

“[Obama’s] lied about so much but I really need my health insurance but I refuse to apply through Obamacare and leave myself and my personal information up for hackers,” she said.

“I have to say I share Tammy’s concerns about her personal information,” Cotton said. “…I certainly wouldn’t put my Social Security number of my tax information in there right now until I’m 100% confident that it’s not going to be stolen by Russian mobsters and I’d have my identity stolen and sold on the black market internationally.”

Even aside from the conspiratorial suggestion that Obamacare left Americans open to the dangers of a shadowy mob halfway around the world, it’s highly unusual for a Congressman to urge voters to not buy health insurance.

Especially when said Congressman admits within the same answer that he, himself, has purchased insurance through the same website.

“I have to buy any kind of insurance plan that I might buy through the exchange…I did in early October just because I knew that it would crash and I would prove a point.”

If Cotton was really so sure that the website would fail, it would have been nice of him to encourage his constituents to sign up when he did, rather than leave them paranoid, confused, and uninsured.