Tractor Diplomacy: 5 Reasons Why Belarus is an Emerging Global Player 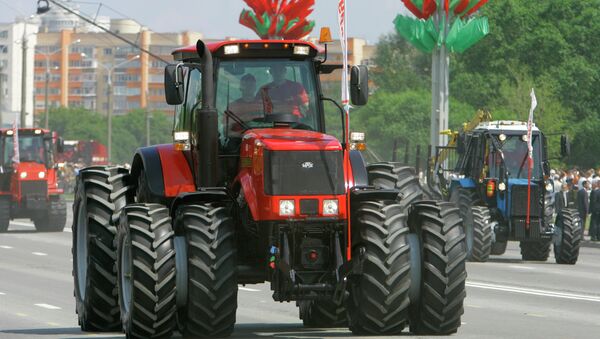 © Sputnik / Ivan Rudnev
/
Go to the photo bank
Subscribe
Since the Minsk summit, Belarus has entered the global stage as a new player in both top-level negotiations and international trade, as the country has used its capacity as an industrial powerhouse to build links worldwide. We look at the five biggest trends that are propelling Belarus into its new status.

As the world waited for the outcomes of the Minsk talks in February, one clear winner had already emerged: Belarus. Only a few years earlier, it was depicted in western media as a pariah state in Russia's shadow, whose leader was called by British journalists "the last dictator in Europe," Belarus was able to reinvent itself as an emerging economic and diplomatic power.

1. The Belarusian Economy Thirsts for Expansion

Belarusian Economy Falters on Domestic Weakness, External Risks
Unlike neighboring Russia and Ukraine, where privatizations and bankruptcies led to the destruction of much of the economic base, Belarus managed to retain its industrial and economic base. From the Minsk Auto Works (MAZ), which produces tractors and buses, and competes with Russian giant KAMAZ to the Minsk Tractor Works (MTZ) which has managed to dominate the post-Soviet agricultural machinery market, producing as much as 10 percent of the world's tractors, the country of nine million has managed to become a regional industrial powerhouse.

Now, with the Russian economy in recession, trade between Russia and Belarus has declined by five percent in 2014. Although the two countries are developing a plan to further reduce barriers to trade, Belarus has turned further abroad to sell its products. On Wednesday, during a meeting with the North Korean Foreign Minister Lee Su-yong, Belarusian Prime Minister Andrey Kobyakov announced:

"We have defined the following priorities: delivery of automotive and agricultural equipment to North Korea, organizing assembly plants for this equipment, shipments of light industry goods and agricultural cooperation."

Kobyakov stated that the goal of the new partnership is to develop a "strong and independent economy" for both countries, and that Belarus is open to large-scale cooperation with the country.

2. Unlike Russia's, Belarusian Companies are Not Swayed by Sanctions

Facts About Countries Sanctioned by United States
In addition, Belarus has shown that it is willing to cooperate with Iran even when the US and EU use sanctions to hurt Belarusian companies that are involved. On February 17, during a meeting with Iranian Foreign Minister Mohammad Javad Zarif, Kobyakov announced:

Belarus has invested over $600 million in Iran, although Kobyakov believes that the volume of trade between the two countries, which currently stands at approximately $100 million per year is far below potential. However, Kobyakov stated that Belarus will continue cooperation despite sanctions, which have a goal of "weakening our countries' economies, distancing us from each other, and laying their own path to our countries' markets."

3. Lukashenko Can Be a Friend Where Putin Can Only Be a Stakeholder

Eurasian Union: the Birth of a new Giant
Although Russia is an important partner in negotiations regarding North Korea, Iran and Syria, it has to take a balanced approach to the issues, where Belarus can be openly friendly. On February 11, following a visit to Syria, Belarusian Foreign Minsiter Vladimir Makei announced:

"In our view, terrorists cannot be divided into good and bad. And in these terms, we firmly believe that the Syrian government must become a partner for all states which truly want to eradicate terrorism in the world."

In addition, Belarus and Syria are developing further plans for economic partnership, as the volume of bilateral trade between the two countries was as much as $85 million per year before the war in Syria.

4. Belarus Has a Special Relationship With Ukraine

Minsk Ready to Become Permanent Host of Ukraine Peace Talks
It is very likely that if it were not for the historically and economically close ties between Ukraine and Belarus, the Minsk talks would not have taken place. Belarusian President Alexander Lukashenko, has continued courting Ukraine despite the country's sanctions against Belarus. In October Lukashenko, who has a 62 percent approval rating among Ukrainians according to a poll released in September, famously told journalists that he is "more Ukrainian than Belarusian."

In addition, Lukashenko stated in a March 2014 interview to Ukrainian television that Belarus has been supporting Ukraine during planting and harvest seasons by loaning machinery to western Ukrainian farmers free of charge, only asking that they pay for the fuel. In addition, despite tensions, Belarusian manufacturers are planning on opening a grain harvester plant in Kharkiv which would produce at least 500 harvesters per year.

Lukashenko: "Belarus and Russia Must Stand Together, Face Down Threats As Never Before"
Belarus is no stranger to "color revolutions" which attempt to overthrow governments through protest tactics. In 2005, the "Jeans Revolution" organized by opposition candidates and the "Zubr" youth movement which used color revolution tactics failed to gather support and led to the collapse of the movement. In 2011, the so-called "revolution through social networks," which used the Internet to organize protests, similarly failed to gain support. In December 2011, Lukashenko announced:

"When certain countries' security service attempted to deploy the so-called 'revolutions through social networks,' we found informational way to withstand them, without blocking anything on the Internet… Everyone must know: if we are attacked, we will defend ourselves. And believe me, we will do it."

Unlike similar tactics, which were used to overthrow governments in Ukraine, Georgia and Serbia and subdued their international stance, Belarus has managed to remain stable enough to pursue an independent and consistent foreign policy.