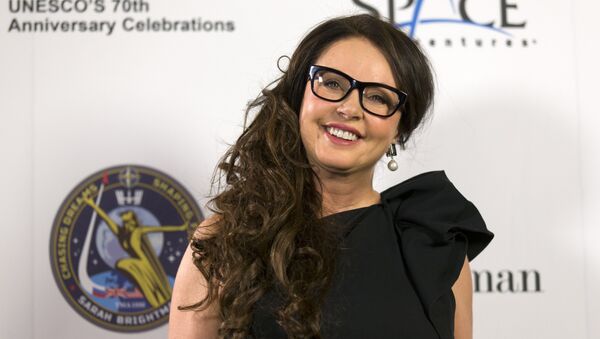 © AFP 2021 / JUSTIN TALLIS
Subscribe
Famed British soprano Sarah Brightman has said that she is working with her former husband to create a song she can perform in space.

Singer Sarah Brightman Answers Questions Before Her Trip to Space (VIDEO)
British soprano Sarah Brightman has said she is working with her ex-husband Andrew Lloyd Webber to create a song she can sing at the International Space Station (ISS), according to news reports.

The 54-year-old told reporters earlier this week that she is "overwhelmed" about her mission at the ISS, which is due to begin on September 1, when she will blast off  in a Russian Soyuz rocket to visit the space outpost.

"I would like to sing something from space. We're trying to work out all the technical details, obviously it's quite a complex thing to do," she said.

The Phantom of the Opera star added that she and Webber are trying to create a song which "suits the idea of space" and which is "beautiful and simple in its message, as well as not too complicated to sing."

She spoke as she continues to train in Star City outside Moscow, where she spent hours learning Russian and being instructed on how to handle all the space equipment.

Brightman is due to spend 10 days on board the ISS, approximately 260 miles (420 kilometers) above Earth.

Earlier, she said that she could not "contractually" disclose the cost of the trip, which some sources said may total about 35 million pounds (52.8 million dollars).

Brightman married Webber in 1984 while she was the star of one of his best-known musicals, Cats, when it was playing in London's West End; she went on to star in The Phantom of the Opera, another musical by Webber.

Six years later, the pair divorced and Brightman started her solo career; since then, she's sold 30 million records around the world.