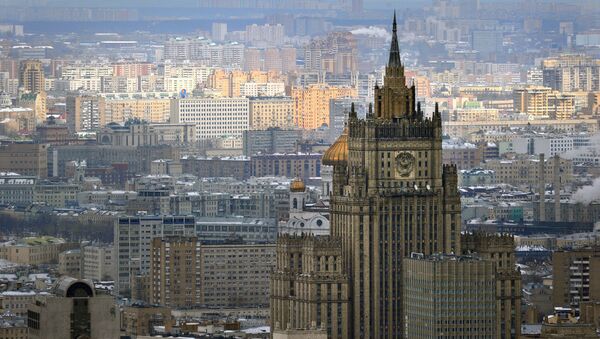 Russia suspends its participation in the work of the Joint Consultative Group under the Treaty on Conventional Armed Forces in Europe.

Lavrov: Implementation of CFE Treaty Suspended
Moscow has halted its participation in a consulting group on the Treaty on Conventional Armed Forces in Europe (CFE), a statement on the Russian Foreign Ministry's site says.

The suspension finalizes Moscow's unilateral moratorium on the implementation of the CFE treaty declared in a decree issued by President Vladimir Putin in 2007.

"Russia made a decision to halt its participation in meetings of the consulting group from March 11, 2015. Thus, suspension of actions in the CFE declared by Russia in 2007 becomes full," the statement reads.

The Russian Foreign Ministry added that "NATO countries actually prefer to bypass the provisions of the CFE Treaty by expanding the alliance."

Moscow Will Respond to NATO Military Buildup Near Russia's Border - Lavrov
An “adapted” version of the CFE treaty was signed in 1999, but NATO members refused to ratify it until Russia withdrew troops from Georgia and the breakaway Moldovan region of Transdnestria, a criterion Russia regards as an “artificial linkage.” In December 2007, Russia imposed a unilateral moratorium on the CFE treaty, citing it’s “irrelevance” over NATO's plans to increase its military presence in Eastern Europe and the alliance's refusal to ratify the adapted version. In November 2011, NATO member states said they would no longer exchange information on conventional weapons and troops with Russia. In November 2014, Russia suspended the implementation of the CFE Treaty.

"In these circumstances, Russia considers it senseless to continue its participation in the meetings of the JCG [Joint Consultative Group]…for political and practical reasons and unreasonably costly from the financial-economic point of view," the ministry said citing head of the Russian Delegation to the Vienna Negotiations on Military Security and Arms Control.