40% of Ukraine Population on Brink of Survival 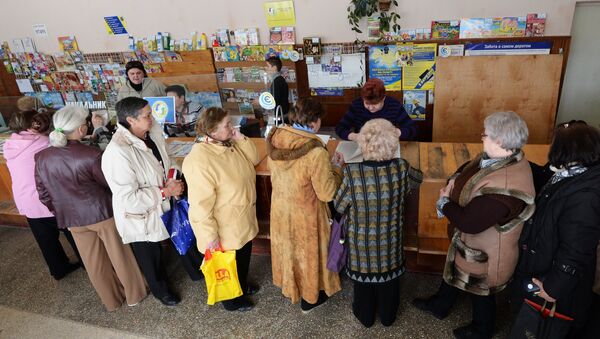 The Ukrainian government intends to cut pensions by %15, as 20 million people will be affected by the hit, roughly 40% of the population. Teachers, doctors and pensioners will suffer the most, given the expansive growth of the Ukrainian budget, especially in public services.

Ukrainians have not been able to keep up with the rising cost of living: the prices for food, medicines, clothes, footwear, public services and public transport have all risen. According to the data of the state statistics service, inflation in February reached 34,5% compared with the same month of 2014.

Moreover, the Ukrainian government is in a hurry to cut costs, with the decision of Rada to reduce pensions for working pensioners by 15% until January 1, 2016. According to the Minister of Social Politics Pavlo Rozenko, who introduced the document, the retirement fund needs 80 billion UAH.

"In fact, we are talking about 40% of the population. People in the cities, who do not have any possibility to grow their own vegetables will face the hardest hit. Our countrymen will have to solve another problem — how to save money on home heating," the Senior Analyst on economic issues of International Center for Policy Studies, Alexander Zholud said.

The national Commission, who's in charge of the regulation of energy and utilities, increased gas prices for home heating 3.3 times.

The heating prices along with gas are going up. From April the weighted average tariff for households will increase by 71,8%.

Retailers admit that they have been forced to change food prices every day. Not only have import prices grown, but also prices for necessities as milk, bread, flour and cereals. On average, these products have increased in price by 20-30%.

Non-food goods such as clothes, shoes, medicines, household chemicals are mainly imported from abroad. The prices for them have grown almost double due to the devaluation of the hryvnia. For example, if two months ago cough syrup cost 30 UAH, now it costs 60-70 UAH.