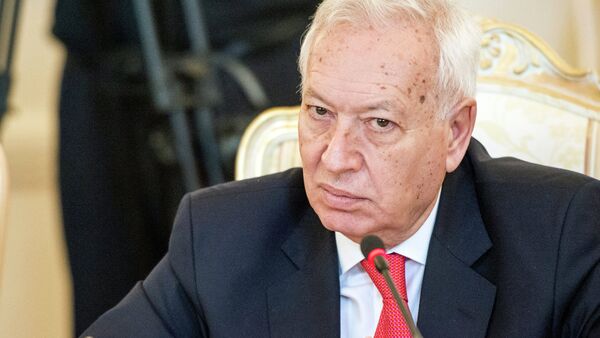 Spanish Foreign Minister Jose Manuel Garcia-Margallo said that Russia's interests should be reflected as well in the Ukraine-EU Association agreement.

‘I think that we need to somehow include Russia’s interests into the association agreement between Ukraine and the European Union, this agreement needs to be complemented by cooperation with Russia,” the Spanish minister said after meeting with his Russian counterpart Sergei Lavrov in Moscow.

In 2013, then-president of Ukraine Viktor Yanukovych decided against signing an association agreement with the European Union, triggering a wave of protests. Yanukovych was ousted in a coup February 2014.

Spanish FM to Visit Moscow Sunday to Discuss Ukraine, Anti-Russia Sanctions
The EU-association deal was then signed by the new government, but the establishment of a free trade area, one of the provisions of the agreement, was suspended until 2016 following trilateral talks between Russia, Ukraine and the European Union. Moscow has repeatedly expressed concern that this could result in an uncontrolled flow of non-regulated goods from the European Union to the Russian market.

Strategic partnership between Russia and the European Union needs to be restored, the Spanish top diplomat said.

“Of course it’s obvious that relations between the European Union, of which Spain is a part of, and Russia are not going through the best of times. The situation needs to be resolved in a constitutive manner, and this is the issue of Ukraine. A broader format is necessary, in which we could return to strategic cooperation that we’ve had for a long time,” Garcia-Margallo said.

Garcia-Margall stressed the need for a broader format, in which Spain and Russia could return to the "strategic cooperation that we’ve had for a long time."

EU Unanimity on Anti-Russian Sanctions ‘Impossible’ - EU Council President
Relations between the European Union and Russia, its largest neighbor and third largest trading partner, have deteriorated amid the Ukraine crisis over the past year.

There is no reason for the European Union to expand sanctions against Russia since the Minsk agreements are being fulfilled, the Spanish foreign minister said.

He added that sanctions were not beneficial to any party and "bring great harm to the Spanish economy."

Last month, Garcia-Margallo stated that sanctions "cost us all dearly," claiming that the EU lost 21 billion euros ($24 billion) due to the restrictions imposed on Russia.