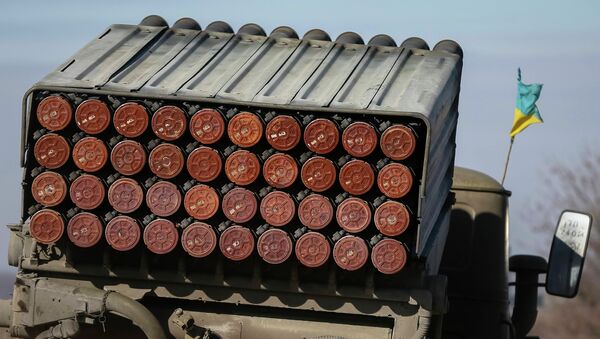 “We have currently withdrawn all heavy artillery systems,” Stelmakh said on 112-Ukraina television.

On Monday, the head of the special operations in eastern Ukraine, Andriy Lysenko, said that Ukrainian forces would not fully withdraw its heavy artillery.

The same day, Deputy Commander of Donetsk People’s Republic (DPR) militia Eduard Basurin said that Kiev statements regarding weapons withdrawal were false, as Kiev pulled back weapons at a distance that would allow them to quickly redeploy the artillery.

E Ukraine's Breakaway Republics Complete Heavy Weaponry Withdrawal
Donetsk and Luhansk self-proclaimed republics stated their pullout was completed March 1, pointing out that they had met the deadline imposed by the Minsk reconciliation agreement.

Kiev and independence supporters in eastern Ukraine agreed to implement ceasefire and pull back heavy weaponry on February 12 in Minsk.

A previous Minsk deal in late 2014 to resolve the Ukrainian crisis failed to yield results, with fighting intensifying in the first weeks of 2015. The armed conflict in eastern Ukraine has claimed more that 6,000 lives since April 2014, according to UN estimates.