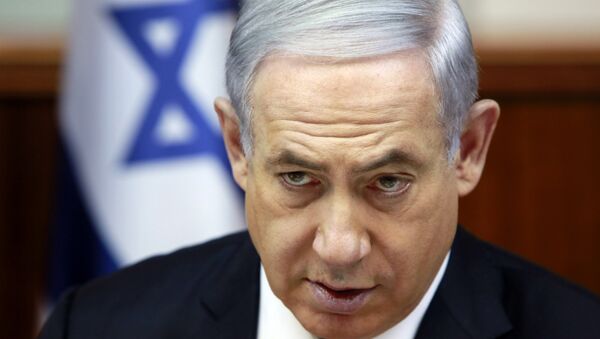 Israeli Prime Minister Benjamin Netanyahu has disavowed his 2009 speech supporting an end to the Israeli-Palestinian conflict with a two-state solution.

In a statement released by his right-wing Likud party on Sunday, the prime minister explicitly said that Tel Aviv would never withdraw from any part of the occupied territories, rejecting a key goal of the international community as he seeks to challenge hardliners in national elections on March 17.

“Israel will never make concessions, no withdrawals,” he said, “any territory ceded by Israel would fall in the hands of Islamic extremism, and terror groups, supported by Iran.”

Likud Party spokesperson Elie Bennet said Netanyahu’s 2009 Bar Ilan speech that calls for a Palestinian state next to Israel, “is not relevant anymore.”

"Today Netanyahu revealed his true face," Erekat said. "Since 1993, he worked hard for the destruction of the option of peace and the option of a two-state solution."

"When given the choice between negotiation and dictation he has chosen dictation… Netanyahu's policies are a major threat to peace and stability in the region,” he added.

The statement came after Israeli Ynet News published what it called “a secret list of concessions made by Netanyahu to the Palestinians during his previous term in office,” which it said “completely contradict all positions and stances the Prime Minister currently presents.

According to Ynet, Ron Dermer, Netanyahu’s aid at the time of the speech and now serves as Israel’s ambassador to the US, had said that the Prime Minister vowed commitment to the two-state solution, establishing a Palestinian State along the 1967 borders through peace talks.

Dermer had also informed Quartet Committee head Tony Blair “Israel does not only want to grant the Palestinians a state, but also one along the 1967 border,” Ynet reported. However, the Israeli ambassador denied the report, saying there has been no commitment of any type regarding the issue.

The international community has long pushed for the creation of a Palestinian state within the lines of the 1967 Mideast war.

In 1993, Palestinians and Israelis signed an interim agreement to end the conflict.

Several rounds of peace talks have been held since, with the most recent breaking down last year.

Ahead of national elections, centrist and leftist political parties in Israel have voiced support for the resumption of peace efforts with the Palestinians.

There was no immediate US reaction.