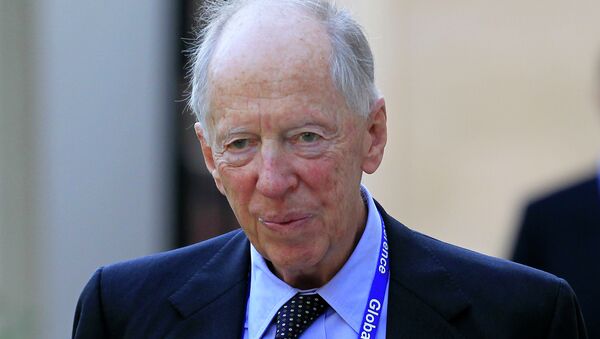 Lord Rothschild characterized the geopolitical situation in the world as the most dangerous since the end of WWII, warning investors about a forthcoming crisis.

Lord Rothschild has warned about the dark cloud on the horizon for the global economy, characterizing the geopolitical situation as the most dangerous since the end of World War II.

West Pursues Geopolitical Goals 'Demonizing' Global Leaders
"We are confronted by a geopolitical situation perhaps as dangerous as any we have faced since World War II: chaos and extremism in the Middle East, Russian aggression and expansion, and a weakened Europe threatened by horrendous unemployment, in no small measure caused by a failure to tackle structural reforms in many of the countries which form part of the European Union," wrote Jacob Rothschild, a British investment banker and a member of the prominent Rothschild family, in an annual Strategic Report of RIT Capital Partners plc (RIT).

RIT is an investment trust that has been investing "in a widely diversified, international portfolio" delivering high returns to shareholders since 1988.

Although Rothschild's RIT can currently boast the highest level of its share price, not everything is rosy in the garden for the global economy, emphasized Lord Rothschild: "The world economy grew at a disappointing and uneven rate in 2014 after six years of monetary stimulus and extraordinarily low interest rates."

The West Has Written an Ideological Check to Ukraine Which It Can't Cash
Furthermore, the value of paper money has reduced substantially, as countries were trying to generate growth by lowering the value of their currencies, particularly the Euro and the Yen, which have lost over 12 percent against the US Dollar during the last year. The undesirable consequences of such monetary experiments are hard to predict, noted Lord Rothschild.

It seems that Rothschild's concerns are shared by the EU member states as well: at the end of 2014 several European countries demonstrated a revived interest in gold as a monetary policy instrument and focused on repatriating their bullion gold reserves from abroad, citing issues of economic stagnation and an unprecedented level of money printing in the world.

However, Jacob Rothschild underscored that the majority of companies are reporting profits exceeding forecasts together with steady earnings growth.

The banker believes that "the combination of a more competitive Euro and an aggressive program of quantitative easing and the yields available on equities, may well lead to even higher valuations."