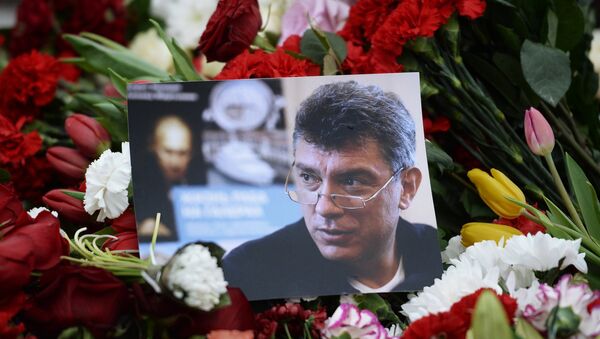 According to Bortnikov, as cited by Rossiya-24 television channel, the suspects' names are Zaur Dadayev and Anzor Gubashev.

"According to investigators, the detainees were involved in organizing and committing the murder," the Russian Investigative Committee said Saturday.

The FSB head added that Russian President Vladimir Putin has been informed of the suspects' detention.

"Two suspects have been arrested as a result of work carried out today in connection with this crime. These suspects are Anzor Gubashev and Zaur Dadaev and the head of state has been informed," Bortnikov said.

Nemtsov Murder Used by US and Allies to Try to Destabilize Russia –Analyst
Boris Nemtsov was fatally shot at 11:40 p.m. Moscow time on February 27 (20:40 GMT), while crossing a bridge next to the Kremlin with Anna Duritskaya, a Ukrainian model who has returned to Ukraine after questioning.

Duritskaya's lawyer, Vadim Prokhorov, told RIA Novosti that the 23-year-old woman has not been requested to return to Russia for further questioning following Saturday's detention of suspects.

Shortly after the assassination, Putin ordered the Russian Investigative Committee, the Interior Ministry and the FSB to set up a joint investigative team to solve the murder.

In 1991, Boris Nemtsov was appointed the governor of the Nizhny Novgorod Region. He was also a former deputy prime minister in the Russian government under President Boris Yeltsin. At one point he was considered a likely presidential candidate. Nemtsov co-chaired the RPR-PARNAS (Republican Party of Russia – People's Freedom Party) since 2012 and was also one of the leaders of the liberal Solidarnost movement. Since September 2013 and until his death, Nemtsov served as a member of the Yaroslavl Region's parliament.