Earthquakes in Oklahoma Likely to Be Stronger, More Frequent - Report 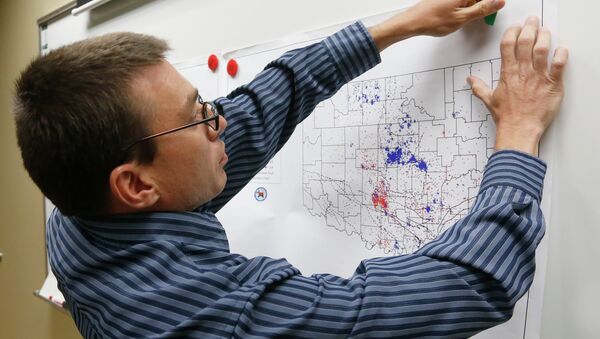 WASHINGTON (Sputnik) — The US state of Oklahoma is likely to experience stronger and more frequent earthquakes as a result of reactivated faults that have caused a spike in in recent years, the US Geological Survey (USGS) said in a report.

“The sharp increase in seismicity over a broad region of central Oklahoma has raised concern regarding the source of the activity and its potential hazard to local communities and energy industry infrastructure,” the report, published on Friday, said.

The USGS found that since 2009 the number of 3.0 or greater magnitude earthquakes in Oklahoma has been 300 times higher than in prior periods.

“A primary reason for reactivation is the northeast or northwest orientation of the faults relative to the east to west direction of regional tectonic stress in earth’s upper crust, which increases the probability of a future, larger earthquake,” the report said.

Big Oil Pressured Oklahoma Scientists to Keep Quiet on Fracking-Quake Link
Several studies have concluded that injecting oil and gas wastewater in fracking operations is the reason for the rise in earthquakes. While recognizing these studies, the USGS said their report was meant to inform policy makers and scientists.

“Several recent studies have linked Oklahoma earthquakes with the injection of wastewater from enhanced oil and gas exploration. The purpose of this new study is to inform engineers, the insurance industry and government agencies about the increased earthquake risk in the state, and not to link earthquakes in Oklahoma to oil and gas extraction,” the report said.

Fracking, or hydraulic fracturing, extracts oil and gas by breaking underground shale formations with highly pressurized water and chemicals. A report by the environmental group Environment American found that the fracking industry produced 280 billion gallons of toxic wastewater in 2012 alone.

The oil and gas industry has traditionally disposed of the polluted water by injecting it deep underground in disused oil and gas wells, or injection wells.

USGS published a report last month that said there is remarkable increase in earthquake activity in large areas of the United States that used to experience few if any earthquakes.