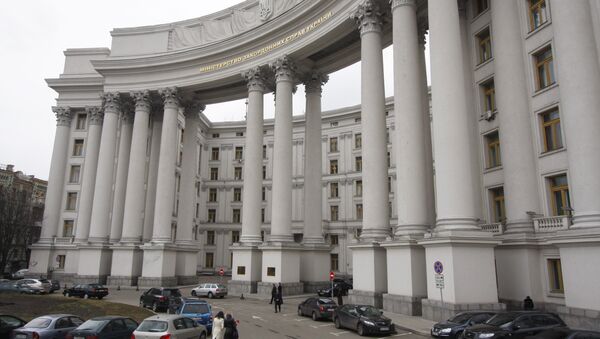 © Sputnik / Grigoriy Vasilenko
Subscribe
International
India
Africa
The Ukrainian Foreign Ministry has released a bizarre statement on its website urging Ukrainians to beware of the "risks" and "dangers" associated with travelling to Russia.

The statement, published on the Ministry's website on Thursday, states that "the Foreign Ministry recommends that Ukrainian citizens planning trips to the Russian Federation realistically assess risks and dangers and carefully weigh the need for such travel."

Ukraine Official Claims Blacklist of Russian Media Part of Information War
The statement notes that "cases of unjustified detention of citizens of Ukraine and a lack of humane treatment toward Ukrainians by Russian law enforcement agencies have become the norm." It adds that this inhumane treatment includes "behavior incompatible with human dignity, including the use of unacceptable methods of physical and psychological pressure, including torture, on Ukrainians."

Independent Russian newspaper Vzglyad notes that the Ministry may have issued the statement as a result of last week's detention by Moscow police of Odessa Regional Council Head Oleksiy Goncharenko during a march commemorating the death of Russian opposition politician Boris Nemtsov.

Goncharenko was detained by police for several hours before being released and leaving Russia. The Ukrainian politician has been suspected of organizing and actively participating in the events of May 2, 2014 in Odessa in which dozens of anti-Maidan activists, including a Russian citizen, were killed in the House of Trade Unions building. Commissioner of Human Rights, and organizer of the 'White Book' on politically motivated crime and violence in post-Maidan Ukraine, Konstantin Dolgov called for Goncharenko's arrest and trial for his alleged involvement in the May 2 events.

World
Civilians Bore Brunt in ‘Catastrophic' Year for Human Rights
Following the Maidan coup and Kiev's launching of its military operation in the country's southeast, hundreds of thousands of Ukrainians fled east to neighboring Russia in search of safety. There are now an estimated 906,000 refugees from the war-torn southeast located in Russia. In total, the Federal Migration Service estimates a total of 2.5 million Ukrainians living and working in Russia, among them over 1.27 million men of draft age.
Newsfeed
0
Access to the chat has been blocked for violating the rules . You will be able to participate again through:∞. If you do not agree with the blocking, please use the feedback form
The discussion is closed. You can participate in the discussion within 24 hours after the publication of the article.
To participate in the discussion
log in or register
loader
Chats
Заголовок открываемого материала