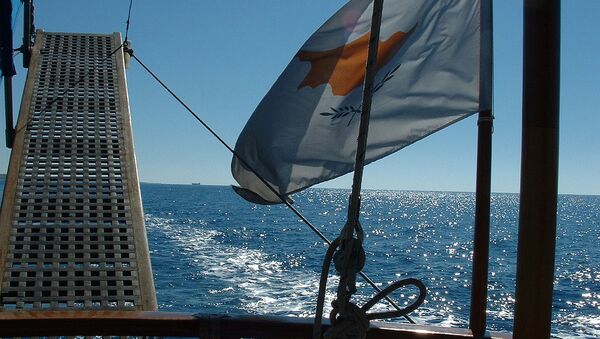 © Flickr / Gerard Queen
Subscribe
President of the Russian Investment Agency Yury Spiridonov said that investments from Cyprus to Russia in 2013 amounted to $22,7 billion, whereas investment from the Russian to the Cyprus economy was $19 billion.

US Urges EU to Refrain From Business With Moscow Amid Russia-Cyprus Deals
MOSCOW (Sputnik), Anna Liatsou — Cyprus continues to pursue a pro-Russian stance despite anti-Russia sanctions, President of the Russian Investment Agency Yury Spiridonov said in an interview with Sputnik.

“Now, that we have entered the times of sanctions, Cyprus, being a full EU member, is still oriented on the improvement of relations with Russia, therefore I think the investment volume will be increasing,” he said.

According to Spiridonov, investments from Cyprus to Russia in 2013 amounted to $22,7 billion, whereas investment from the Russian to the Cyprus economy was $19 billion, “5 of which are direct investments.”

Cyprus Fears Ruble Depreciation May Cut Tourist Flow From Russia
The Russian Investment Agency President noted that Cyprus entrepreneurs “are especially interested in the mining sector, metallurgy and agriculture,” and that potential interest is growing.

Spiridonov provided an example of one investment project in Russia involving Cyprus and Spanish companies.

“One of our recent investments is in the food retail cluster which we will be created in St. Petersburg together with the Spanish Mercasa,” he stated. The main player in the project, according to Spiridonov, is a Cyprus company which plan to invest about $100 million into this project.

Spiridonov stressed the importance of economic ties between Russia and Cyprus.

EU Sanctions Against Russia ‘Seriously Hit’ Cyprus Economy – Official
“[The] Cyprus president would like to build closer relations with Russia, and we will be doing everything possible for a rapprochement of our economic and investment interests,” Spiridonov said.

He stressed that investment interest in 2014 did not diminish, “even despite the troika ‘haircuts’ introduced in 2013.”

In March 2013 Cyprus agreed to overhaul its banking sector and introduce austerity measures for bondholders and savings account holders with balances over 100,000 euros (some $111,600) in the country’s two biggest banks.

These measures were in trade for a 10-billion-euro bailout from the troika of international creditors, specifically the European Union, the European Central Bank and the International Monetary Fund.