Denmark Has No Plans to Boost Military Efforts Against ISIL 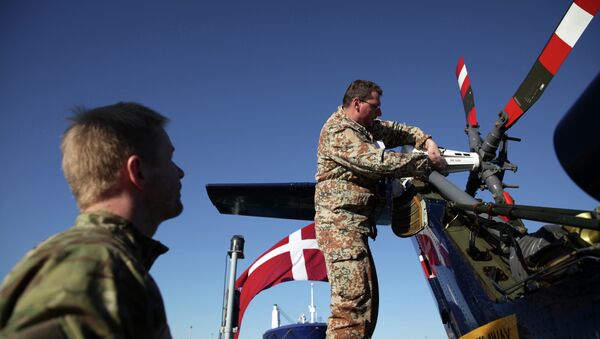 © AFP 2021 / YIANNIS KOURTOGLOU
Subscribe
According to Denmark's Foreign Minister, country does not plan to increase its military engagement to help the US-led coalition to fight Islamic State (ISIL).

Iraqi Parliamentarian Claims to Have Evidence of US Support to ISIL
MOSCOW (Sputnik), Anastasia Levchenko – Denmark does not plan to increase its military engagement to help the US-led coalition to fight Islamic State (ISIL), Denmark's Foreign Minister Martin Lidegaard told Sputnik in an interview.

The ISIL threat continues to be among top security problems in Europe in light of the militant group's anti-West rhetoric and the rise of violent extremism in the EU states.

Denmark has been part of the US-led coalition since September 2014.

"We have no plans of increasing our military engagement [in the coalition against ISIL], but we have plans of increasing in diplomatic and humanitarian fields, also when it comes to more development-based activities fighting extremism in the region," Lidegaard told Sputnik.

The minister stated that military activities alone are insufficient to counter militant activity, as the population suffering under the ISIL rule also needs "soft missions," including humanitarian aid.

US, Iraq Stress Need to Protect Civilians Amid Fight Against ISIL

"If we do not solve the conflict in the region, we will not be able to stop Islamic State," the foreign minister said.

At the same time, Lidegaard noted that Denmark is actively engaged in the military activities of the US-led coalition.

"Denmark is a very active part of the coalition against Islamic State, and we are active in many different tracks. The first track is the military track. We are a relatively small country, but we are providing 14 – 16 aircrafts inside of Iraq. And we have around 130 trained soldiers inside Iraq," Lidegaard elaborated.

The Islamic State militant group controls large areas of Syria and Iraq and declared an Islamic caliphate on the territories that had fallen under its control. It is infamous for numerous abductions, killings, and anti-West propaganda.

The US-led coalition comprising more than 60 countries is carrying out airstrikes against ISIL positions in both Syria and Iraq.