US Wants to Drive Wedge Between Russia and European Nations - Expert 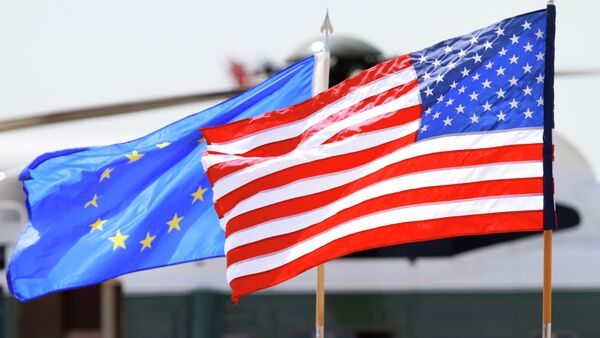 © AP Photo / Jacquelyn Martin
Subscribe
According to a prominent French lawyer with ties to French Arise, a Gaullist political party, the United States seeks to split Europe by notably preventing the EU from bolstering relations with Russia.

He said that Washington is doing its best "to weaken Europe and politically squeeze it within the framework of a number of international organizations, such as NATO, the WTO, the IMF and the World Bank, as well as the Transatlantic Trade and Investment Partnership agreement."

Temple added that Washington does not want to see a strong  and prosperous Europe, which could successfully compete with  the US and boost ties with Russia.

According to him, the US is desperately trying to dominate legally and intellectually, dictating its own concept of law, economics and finance.

He warned of grave political and economic repercussions of such a development, that may prevent the creation of a "new Europe" based on "people and nations, including Russia, rather than "stifling mechanisms."

He pointed out that the information people receive from the Western media is biased, and that the West is increasing its diplomatic pressure on Russia, which is accused of arming militias and sending its regular troops to eastern Ukraine.

He also described the existence of Greece in the eurozone and the hostilities in Ukraine as a litmus test, showing the "fragility of the European house of cards."

Temple warned that the hegemonic ambitions of the US and NATO may finally fuel a "real hot war" that he said would affect a whole array of countries.