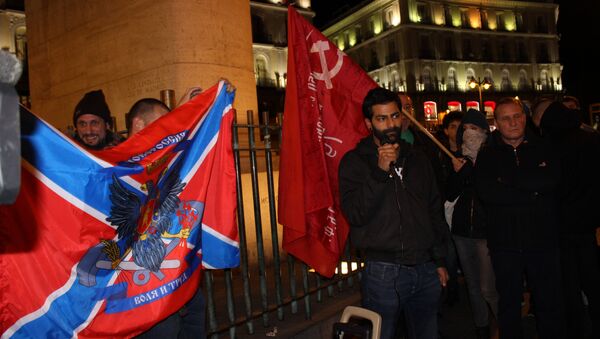 © Sputnik / Elena Shesterina
Subscribe
With some European countries seemingly prepared for a crackdown on volunteers going east to assist the Donbas militia, individuals have been sharing their personal motivations for supporting DPR and LPR forces.

Spanish Press is Tough on 'Pro-Russian Gangs,' Soft on Anti-Assad Jihadists
Volunteers from Europe and the United States coming to the Donbas to help the self-proclaimed Donetsk and Luhansk People's Republics are driven by a variety of personal and ideological motivations, but they all appear united in their willingness to risk their lives to preserve the independence of the region from what they believe is an illegitimate Western-backed government in Kiev.

Recent reports of threats of prison time for eight Spanish anti-fascists detained for providing humanitarian and medical assistance to the residents of Donbas have led to serious questions about what convictions could drive Western volunteers fighting for Donbas to decide to travel to a deadly war zone.

Spanish Police Detain Eight Citizens Who Fought in Donbas
The detained Spaniards themselves provided some details, a humanitarian volunteer named Sergio telling RIA Novosti earlier this week that: "I saw people were killed and burned. I could not tolerate such atrocities against civilians." Sergio noted that he believed that the residents of Donbas should have the right to self-determination, noting that Kiev "should let Donbas residents decide how they want to live." Spanish Committee in Support of Anti-Fascist Ukraine rep Augustin Rios has explained that among Spanish anti-fascists and communists there is a great sense of a debt owed to the people of Donbas for the Soviet Union's historical support for the Republicans in the Spanish Civil War against the fascist forces of Francisco Franco.

Asked about the Spanish government's claims that the volunteers had violated Spain's policy of neutrality in the conflict, a volunteer named Arroyo argued that "there is no neutrality on the part of Spain in this conflict…Spain has supplied military equipment to Kiev and supports the current government. We know that there are Spanish mercenaries in the ranks of the Ukrainian army." The Spaniards could face from 4 to 15 years if convicted of the charges leveled against them, which range from weapons possession, to abetting murder, to violating the interests of the Spanish state.

Volunteers Range From Left to Right

Spanish Mercenaries Fighting in Kiev Volunteer Battalions
A French nationalist volunteer soldier named Guillaume, who recently gave an extensive interview to Russia's Gazeta.ru, presented a perspective from the other side of the political spectrum, noting that he came to the Donbas to fight against the European Union and NATO, institutions which he believes are destroying the French nation. He argued that it is logical to support those powers, including Novorossiya, Russia, Syria, and the BRICS countries, "which resist these forces."

Guillaume told Gazeta.ru that in his estimate, there are about 10-15 Frenchmen assisting Donbas militia at any one time, noting that "in my unit there were eight of them." The volunteer added that "not all French that come are here to fight. Some of them bring humanitarian assistance; others are doctors."

Guillaume, who stands against the values of social liberalism, told Lenta.ru that he was raised by his family to "consider it absolutely normal to fight for my values and ideals." The Frenchman added that he believes that France has been governed by 'liberal totalitarianism' since the 1960s, and that the country is reaching a point where civil tensions may eventually spill into civil war: "the situation in our country is more explosive than ever. It is full of conflicts: ethnic, inter-cultural, inter-religious, social. Added to this is social stratification, unemployment, mass immigration. Too many problems for one country, and if things go on like this, we too may slide into civil war."

Guillaume revealed that over the course of his time in Donbas, he has spent "hundreds and hundreds of Euros," even having to pay for his uniform. "And after that they call us mercenaries!," he exclaimed.

Regarding the Ukrainian soldiers, Guillaume noted that he does "not feel any hate toward the guys from Ukraine. Like us, they are just doing their job. But when you are at war, you must choose who you are for. Some of my comrades were killed by the Ukrainian army. This is war."

An unnamed Italian volunteer whose appeal was recently put up on YouTube explained his decision to join the Donbas militia by noting that: "I am for the self-determination of people. If the people vote that they want to be independent from another nation…this is what I call democracy."

Finally, a US DNR volunteer nicknamed 'Texas' offered his own reasons for volunteering to fight, noting: "Donbas did not want to be controlled by foreign-backed Nazis. I respected that decision; I thought they needed some help, so I came here to help them." Ashamed of his country's purported backing of the Kiev government, Texas noted that he "felt a responsibility to come here to show the people of Donbas and the world that not everyone in the United States" supports US policy and the Kiev government.