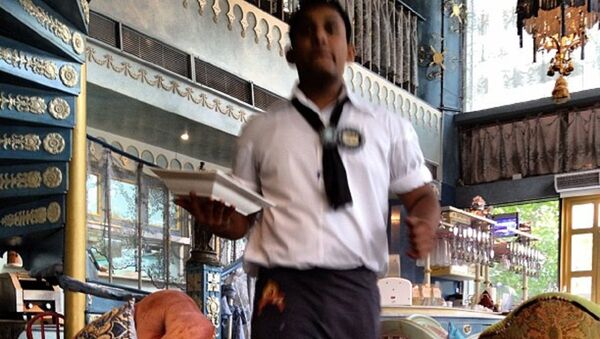 © Flickr / Imran Ahmed
Subscribe
Good help is hard to find: expats in the UAE are complaining about the difficulties of getting reliable maids.

American Arrested in UAE for 'Filthy Arabs' Facebook Post Made in US
Residents of the United Arab Emirates are reporting that they are having difficulties getting reliable domestic help due to a shortage of maids from Asia, who traditionally clean up in the market for home help.
In recent years some Asian countries have begun to impose restrictions on the emigration of domestic workers to the Emirates, leading to a shortage of maids from countries such as the Philippines, Nepal and Indonesia, who are popular among expats looking for help around the house.
In 2010 Nepal lifted a ten-year ban on domestic workers coming to the UAE, but again stopped approving visas for domestic help in 2014 due to concerns about exploitation of workers, while in June last year the Philippines stopped processing contracts for domestic workers in response to contract changes made by the UAE authorities.
One Emirati mother of five, Afrah Ozibi, told an Abu Dhabi-based newspaper, The National, of her distress at the decision: "I have been trying to get a Filipina maid for months now and the office has told me that their embassy is not allowing it because they are unhappy with the conditions set by the UAE. What am I supposed to do now? The prices for maids from Indonesia have sky-rocketed."

UAE is a Backdoor for US-NATO Weaponry Supplies to Kiev - Experts
The Indonesian Embassy, in turn, confirmed in February that the country had imposed a ban on its citizens leaving for domestic work in the UAE and other Arab countries, after Indonesian President Joko Widodo announced that he had asked his government to formulate plans to stop sending domestic workers abroad. "We should have some self-esteem and dignity," the president declared, according to Antara News.
According to recent reports, housemaids from countries such as Sri Lanka, India and Kenya are filling the gap, with African maids becoming increasingly popular due to their low wage demands and the ease of bringing them from their home countries, whose governments do not present obstacles to emigration for domestic work.
One French expat told Gulf News that she is "hoping I will be third time lucky," with her new maid from Ethiopia, while many families complain that they miss their Indonesian maids, who enjoyed popularity due to their Muslim background and knowledge of Arabic. Mother of four Umm Khalid, who "cannot survive even a day without domestic help," explained that  housemaids from Indonesia are preferred "as they are also Muslims and there are minimal cultural and religious differences," but would now look elsewhere for a helper for her Indonesian maid.
000000
Newsfeed
0
New firstOld first
loader
LIVE
Заголовок открываемого материала
Access to the chat has been blocked for violating the rules . You will be able to participate again through:∞. If you do not agree with the blocking, please use the feedback form
The discussion is closed. You can participate in the discussion within 24 hours after the publication of the article.
To participate in the discussion
log in or register
loader
Chats
Заголовок открываемого материала
Worldwide
InternationalEnglishEnglishMundoEspañolSpanish
Europe
DeutschlandDeutschGermanFranceFrançaisFrenchΕλλάδαΕλληνικάGreekItaliaItalianoItalianČeská republikaČeštinaCzechPolskaPolskiPolishСрбиjаСрпскиSerbianLatvijaLatviešuLatvianLietuvaLietuviųLithuanianMoldovaMoldoveneascăMoldavianБеларусьБеларускiBelarusian
Transcaucasia
ԱրմենիաՀայերենArmenianАҧсныАҧсышәалаAbkhazХуссар ИрыстонИронауОssetianსაქართველოქართულიGeorgianAzərbaycanАzərbaycancaAzerbaijani
Middle East
Sputnik عربيArabicArabicTürkiyeTürkçeTurkishSputnik ایرانPersianPersianSputnik افغانستانDariDari
Central Asia
ҚазақстанҚазақ тіліKazakhКыргызстанКыргызчаKyrgyzOʻzbekistonЎзбекчаUzbekТоҷикистонТоҷикӣTajik
East & Southeast Asia
Việt NamTiếng ViệtVietnamese日本日本語Japanese中国中文Chinese
South America
BrasilPortuguêsPortuguese
NewsfeedBreaking
20:44 GMTUS Air Force Developing 2 New Drones to Deploy Against China
20:28 GMT‘I'm So Pleased!’: Shakira Reacts to Princess Charlotte's Favorite Song
19:49 GMTUS Justice Department Sues Texas Over Alleged Bias in Congressional Redistricting
19:28 GMTIran Blasts France’s ‘Destabilizing’ Gulf Arms Sales as Emirati Envoy Makes Rare Tehran Visit
19:23 GMTNASA Chooses 10 Astronaut Candidates for 2-Year Training for Space Station
19:20 GMTUS Must Guarantee Long-Term Agreements to Restore JCPOA, Iranian Foreign Minister Says
19:20 GMTOxford-AstraZeneca Vaccine Developer Warns of Possibly More Lethal Future Pandemics
19:00 GMTFrom Trade to Space Cooperation: Highlights of Putin-Modi Talks at 21st India-Russia Annual Summit
18:39 GMTEx-DC National Guard Official Slams Testimonies of Pentagon Generals on 6 January as Absolute Lies
18:23 GMTDems Growing Increasingly Concerned by Midterm Prospects as Biden Polling Numbers Drop
18:21 GMTWhite House Confirms US Will Not Send Representation to 2022 Winter Olympics in Beijing
17:32 GMTKorean Treat and Eurovision Winner Among Most Mispronounced Words of 2021
17:24 GMTWhitehall Union Claims Victory After Court Dismisses its Case Against Johnson and Patel
17:14 GMTPope Francis Stumbles on Airstair as He Boards Plane in Greece - Video
17:02 GMTTrump’s Social Media Listing Vehicle Says Under Inquiry From US Securities Investigators
16:47 GMTRussia, Egypt Start Naval Phase of 'Bridge of Friendship-2021' Drills in Mediterranean
16:40 GMTUS Reportedly Mulls Cutting Russia Off SWIFT, Sanctioning Energy Producers & 'Putin's Inner Circle'
16:37 GMTFinland’s PM Parties at Nightclub Until 4am After Contact With COVID-Positive Official
16:14 GMTSecond Week of Ghislaine Maxwell Sex Scandal Trial Kicks Off
15:56 GMTBoost for Britain! Is the UK’s COVID-19 Third Jab Campaign Saving Lives?