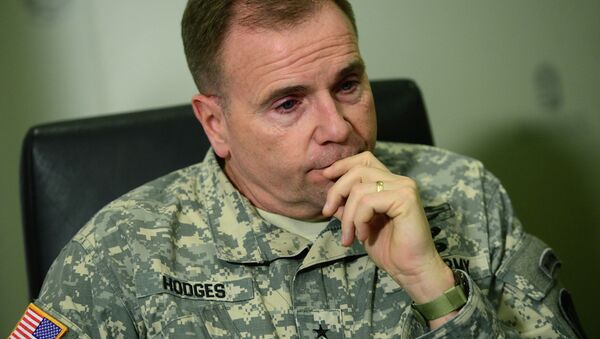 © AFP 2021 / ATTILA KISBENEDEK
Subscribe
Generals always prepare for the last war, but in the case of Lt. Gen. Hodges, the war may have never really happened. However, that's no reason to stop fighting.

It was all over. Endless columns of T-64 tanks were about to steamroll through the Fulda Gap all the way to the English Channel. Elite paratroopers, armed to the teeth, were marching into an unending row of Il-76 transport planes that took off every minute, from every airfield. Early warning radar stations were overwhelmed as a tsunami of ICBM launches consumed every point on their screens. Against all odds, we managed to wake our German allies and prepare them to make one last stand. As they marched forward to show… Wait. Oh no. Are those broomsticks?

That's the kind of Cold War mentality that could have motivated Lt. Gen. Frederick "Ben" Hodges to go off on a bizarre rant on Tuesday, when he blasted NATO countries for not racking defense spending. He particularly berated Germany:

"For the most powerful nation in Europe, which takes a leadership role in the EU, it is unacceptable to have helicopters that don’t fly, or aircraft you can’t use."

NATO to Install New Units in Europe Amid 'Competition With Russia' - Chief
The Warsaw Pact ceased to exist a quarter of a century earlier, and even parts of the former Soviet Union joined NATO, but for Hodges, the end was a breath away. Russian President Vladimir Putin had found the weakest link, people who choose cooperation and dialogue over sanctions and military escalation.

"I am sure Putin wants to destroy our alliance, not by attacking it but by splintering it."

"If you don’t believe Russia is directly involved in Ukraine now, you’ll never believe it. You don’t want to believe it."

There are only a few things that Lt. Gen. Hodges needs to prepare for the doomsday battle he never got to fight. NATO countries have to prepare an army that can at least try to withstand what has to be an inevitable Russian onslaught.

US to Deploy Six National Guard Companies to Ukraine This Week
However, these comments are not the view of a delusional James Bond villain who is hellbent on provoking a war between nuclear powers for his own petty amusement, they are a matter of policy which Lt. Gen. Hodges expresses. In the Guardian, the comments were published with a threatening-looking Vladimir Putin as the cover image, and Hodges' theory on the number of Russian troops in Ukraine was published as a matter of fact, and not opinion.

As for Lt. Gen. Hodges, he remains the commander of the United States Army Europe (USAREUR) Command, and on Wednesday Evening launched Operation Atlantic Resolve, live-fire exercises in northern Poland, which include the US Army 2nd Cavalry Regiment and Poland's 12th Mechanized Division.