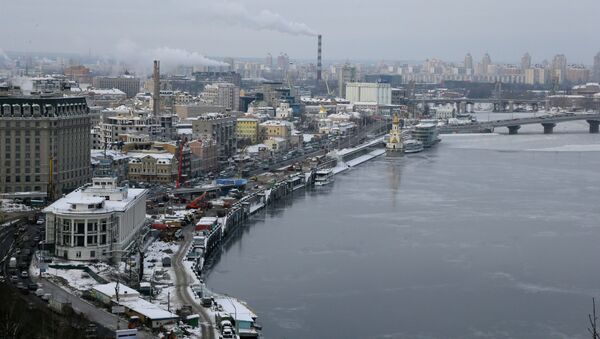 © AP Photo / Efrem Lukatsky
Subscribe
With growing numbers of people, including schoolchildren, facing the prospect of being attacked in the city streets, Kiev's wealthier residents have been turning to private bodyguards in an attempt to ensure their safety.

Kiev Residents Turn Apartments Into Bunkers Amid Rising Crime Rates
With crime rates, including street attacks, skyrocketing in Kiev, the city's wealthier residents have been turning to private security companies to protect themselves and their families, Ukrainian news service Vesti has reported.

The manager of one such firm told Vesti that his firm offers "unarmed and armed security guards," and that "recently, customers have increasingly opted with the latter." He noted that preferences vary depending on who the guard is for. For wives, "sometimes we are asked that the guard is older or less attractive, so that his wife will not be tempted to cheat on him." For children, "the situation is the opposite –people try to choose someone who won't scare the child." A personal bodyguard in Kiev costs anywhere from 5,000-37,000 hryvnia ($205-$1500 US dollars), depending on the work hours, whether he is armed, his age and experience.

Kindergartens and schools have also been turning to security firms as of late, with parents reporting growing numbers of attacks on children returning from the second shift of double shift schools.

5 Reasons Why Ukraine is Becoming Europe's Zimbabwe
A representative from the Orlan Security company told Vesti that "these days, people are afraid to go out into the streets in the evening. The demand for bodyguards has grown. And it's not limited to personal bodyguards either. For example, now some kindergartens hire professional security, paid for by the parents' committee."

Kiev resident Elena Savchenko told Vesti that her son was recently robbed in the street, with robbers stealing 200 hryvnia ($8.15 US) and a cell phone. "At the parents' meeting recently we were warned of an increase in attacks on children returning from school in the second shift. Nothing serious occurred, thank God! – Just threats and thefts of cellphones, but for a ten-year-old this is a stressful occurrence. Now my husband and I are thinking about hiring a security guard for our son. It's expensive, of course, but things will be quieter."

Sergei Shabovta, the president of Ukraine's Security Workers Union, has confirmed the growing incidence of street attacks has been good for business. For wealthier clients looking to protect their children, he recommends panic buttons, which allows his service to "call security at any moment."