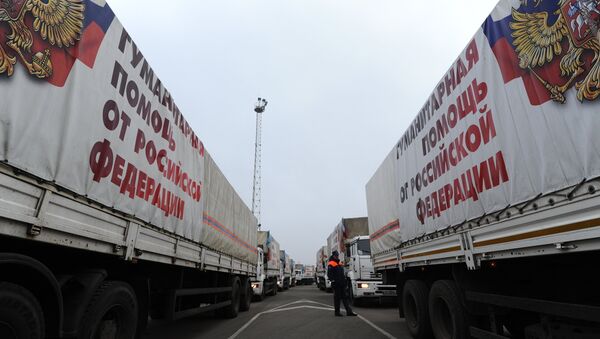 © Sputnik / Sergey Pivovarov
/
Go to the photo bank
Subscribe
The 17th humanitarian convoy from Russia comprising a total of 160 trucks delivered over 1,800 tons of food and daily essentials to Donetsk and Luhansk.

"A total of 80 trucks delivered food items and other daily essentials to Donetsk," Oleg Voronov, deputy chief of the crisis management center with the Russian Emergencies Ministry, told RIA Novosti.

Earlier in the day, Voronov said that the same number of trucks carrying humanitarian aid had arrived in the Luhansk region.

Normandy Quartet Leaders Discuss Humanitarian Aid to East Ukraine’s Donbas
No emergency situation was detected on the road. All the trucks are to be discharged, and then they will return back to Russia, Voronov stressed.

Ukraine's southeastern regions of Donetsk and Luhansk have been suffering from a severe humanitarian crisis since Kiev launched a military operation against local independence supporters in April 2014. Thousands of people lost their homes and crucial infrastructure has been damaged.

Since August 2014, Russia has sent over 20,000 tons of food, water, clothes, medicines, power generators and building materials to the Donetsk and Luhansk self-proclaimed republics.