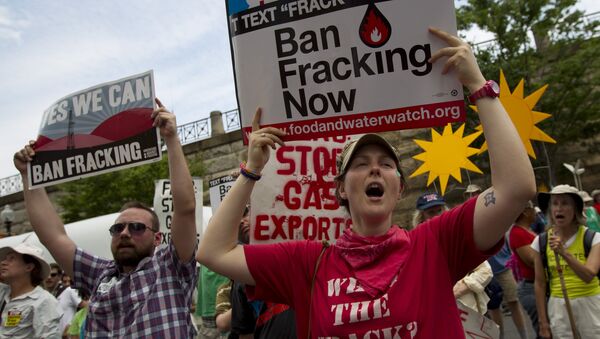 © AP Photo / Jose Luis Magana
Subscribe
The Environmental Protection Agency’s 2010 study of the risks of natural gas drilling was supposed to be a thorough investigation of the industry’s impact on the environment. Instead, the study was influenced and shaped by the very companies it was supposed to investigate.

Environmental activists were cautiously optimistic when Congress tasked the EPA with launching the ambitious investigation into hydraulic fracturing, or fracking.

“This is about using the best possible science to do what the American people expect the EPA to do – ensure that the health of their communities and families are protected,” Paul Anastas, Assistant Administrator for the EPA's Office of Research and Development, said in 2011.

But the study relied heavily on cooperation from the natural gas industry. That enabled companies like Chesapeake Energy and Range Resources to secure promises from the EPA, while their leverage increased as other companies in the industry declined to participate.

In 2011, after energy companies made a number of unfeasible demands, the EPA dropped one of the study’s key goals: to measure pollution levels before and after fracking at two new well sites, according to documents obtained by DeSmogBlog.

Energy company officials were allowed to edit documents, insisted on vetting EPA contractors, and demanded to review scientist's notes, photographs and lab results before they were published, the documents show.

And apparently, the EPA consented.

“[Y]ou guys are part of the team here,” one EPA representative wrote to Chesapeake Energy as they together edited study planning documents in October 2013, “please write things in as you see fit”.

Even though the EPA had announced that the study would focus on all stages of the process (drilling, wastewater disposal and others), Chesapeake officials repeatedly pressured the agency to focus solely on the fracturing stage.

“It appears the EPA has extended the scope of the study to include all development activities,” a company representative wrote, objecting to language used in study plans in October 2013. “CHK [Chesapeake Energy] recommends that the EPA focus only on hydraulic fracturing.”

In another instance, Chesapeake started drilling operations before the EPA could conduct baseline testing.

Chesapeake also used their ability to edit documents to raise additional objections that ultimately led the EPA to cancel their testing plans altogether.

“Given the current schedule, there does not appear to be enough time to capture the seasonal variation in sample characteristics, however this is critical to determining if a change is significant,” Chesapeake warned the EPA in October 2013.

Federal environmental officials later cited this issue in explaining why they had been unable to find any suitable well sites to conduct their testing.

In a June 2014 email to a Greenpeace, Claudia Meza-Cuadra, Office of Science Policy of the EPA, wrote “it is necessary to gather a minimum of one year of characterization data for ground water and surface water prior to and following unconventional exploration activities in the study area.”

Range Resources struck a confidential agreement with the EPA, which led to a series of concessions by federal officials, including three-day’s notice prior to visiting the drill site, allowing Range reps to accompany EPA scientists, and access to test results showing possible contamination, among others.