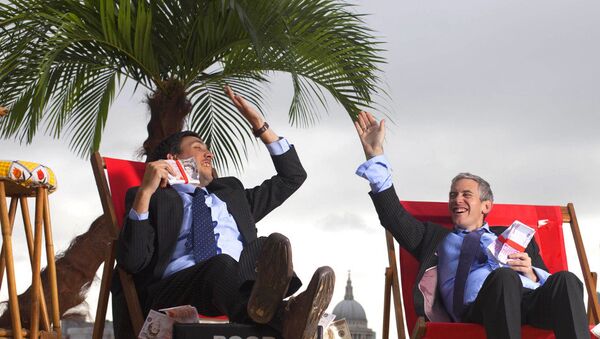 © Flickr / Enough Food IF
Subscribe
It's a 200-year-old, little-known tax break that effectively allows some of world's wealthiest people to treat the UK as their own tax haven. However there are increasing calls to scrap the non-domicile rule for good amid the country's recent banking scandals.

While earlier incarnations of the rules were first established in 1799, the non-domicile rule was implemented by Chancellor of the Exchequer David Lloyd George in 1914, and has since allowed many to avoid paying tax on overseas profits while they are living in Britain.

During the expansion of the British Empire, this rule was aimed at giving those from the different colonies an exemption from colonial taxes while in the UK, as they may also have been subjected to British taxes.

The non-domicile status applied to those British residents whose parents were born overseas, but who showed they had an intention of retuning to their family's former country one day.

A relic of empire that created a #tax colony: non-domicile tax avoiders not benefitting the society. http://t.co/bRxlit8CZg @FT

Others who moved away to different parts of the empire to find a new home, but who returned to Britain were also eligible to benefit under the non-domicile rules, as long as they could show they also had an intention to return to their newfound 'permanent' home one day.

However, instead of being fazed out, the rule is still in force today, allowing many entrepreneurs and business owners to benefit as 'non-doms', as they only pay tax on the money they actually earn in Britain, and not their foreign income or assets, which are often set up in countries with favourable tax arrangements.

HMRC clamps down on tax avoidance schemes http://t.co/QjnxIyQmLx so why perpetuate the non-domicile loophole?

This has led to many wealthy foreigners and British-born people benefiting from the law.

The case of HSBC's chief executive Stuart Gulliver has also drawn the ire of the public due to his seemingly loose connections to the non-domicile rules. Despite being a British citizen, born and raised in the UK, Mr. Gulliver nominated himself as being domiciled in the low-tax haven of Hong Kong, despite working in the UK for the past 12 years and sending his children to school in Britain.

These recent scandals, along with the recent cuts to government spending associated with austerity measures, has led to increased calls for the non-doms to pay up on their overseas accounts.

It's thought that there are about 120,000 non-doms in the UK, while many have noted that the government could be missing out of vast amounts in taxes.

Why should your tax bill be determined by an accodent of birth? | Tax Reserarch UK http://t.co/IANwqKUitd

Richard Murphy, chartered accountant and author of the blog Tax Research UK has been a long-standing critic of the non-domicile rule, calling for it to be scrapped.

"The domicile rule has outstayed its welcome. It's time for it to go", he wrote in his blog.

This view was backed up by an editorial in the Financial Times, which called for current politicians to put an end to the tax break initially introduced by British Prime Minister William Pitt the Younger in the late 18th century.

"More than two centuries after the introduction of income tax by Mr Pitt, his successors should end the egregious situation where the wealthiest enjoy the privileges of UK residency without paying their fair dues to the exchequer. The anomaly of non-dom status cannot be defended. It should be scrapped."

Labour leader Ed Miliband has joined the call to crackdown on tax havens and tax breaks relating to the UK and its Crown Dependencies as part of his election campaign, saying that such arrangements were costing "British families and businesses billions of pounds."