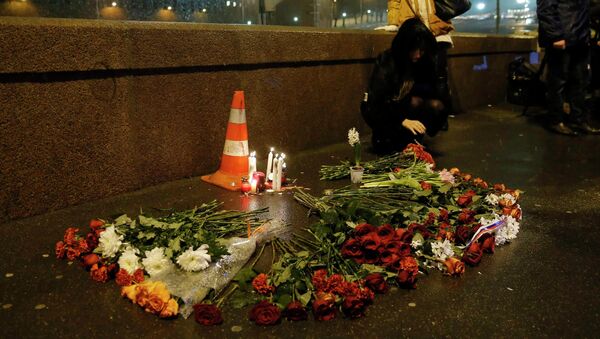 © REUTERS / Maxim Shemetov
Subscribe
Anna Duritskaya, an eyewitness to the murder of Russian opposition politician Boris Nemtsov, has arrived in her native Ukraine, her lawyer said in an interview to Ukrainian TV.

Previously, Ukrainian Foreign Ministry spokesman Yevhen Perebyinis tweeted that Anna Duritskaya, who was with Nemtsov when the politician was gunned down late Friday, had left Moscow and was en route to Kiev.

"Anna Duritskaya just set out of Moscow to Kiev. Ukrainian Embassy in Moscow provided all necessary support for her return home," it reads.

He added that Duritskaya is accompanied by her lawyer.

Officials Deny Cameras Were Off During Nemtsov's Murder
The four bullets that hit the politician were reportedly manufactured back in 1986 and another two — in 1992. The murder weapon was either a Makarov pistol or a converted Izh gas pistol, according to media reports. The latter is easier to obtain, but is prone to misfires.

Duritskaya said she was unaware of any threats received by the Russian politician prior to his death.

The key witness in the murder of Russian political opposition leader Boris Nemtsov, Anna Duritskaya, was not forcibly held by investigators in Moscow, the Russian Investigative Committee said Tuesday.

The Investigative Committee said Duritskaya has already returned to Ukraine and has expressed her willingness to continue her cooperation in the investigation and is prepared to appear for further questioning into the murder.