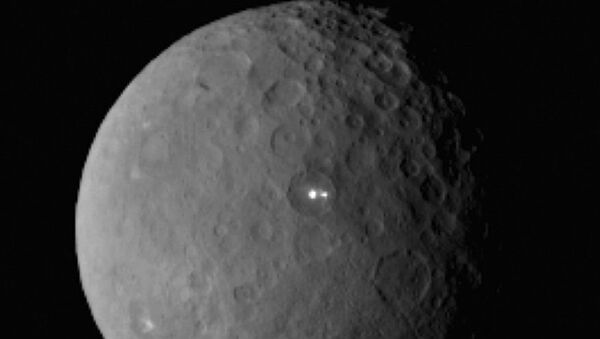 © NASA
Subscribe
The Agency’s Dawn spacecraft, which snapped photos of mysterious bright lights on the dwarf planet Ceres last week, will be landing on the planet Friday to determine what those intriguing flashes are all about.

Recent images of Ceres, the largest object in the asteroid belt between the orbits of Mars and Jupiter, show two small points of light NASA scientists have dubbed “bright spots.” They believe these spots could be clues as to how Ceres formed and whether the planet’s surface is changing.

"Dawn is about to make history," said Robert Mase, project manager for the Dawn mission at NASA’s Jet Propulsion Laboratory (JPL) in Pasadena, California. "Our team is ready and eager to find out what Ceres has in store for us."

As Dawn moves closer into Ceres’s orbit, researchers will be looking for any changing features that would suggest geological activity, according to NASA.

“Studying Ceres allows us to do historical research in space, opening a window into the earliest chapter in the history of our solar system,” said Jim Green, director of NASA’s Planetary Science Division at the Agency’s headquarters in Washington. “Data returned from Dawn could contribute significant breakthroughs in our understanding of how the solar system formed.”

Dawn began its final approach toward Ceres in December.  The spacecraft has taken several optical navigation images and made two rotation characterizations, allowing Ceres to be observed through its full nine-hour rotation.

"We've been using the ion propulsion system for a long time gradually to reshape Dawn's orbit around the sun so that it matches Ceres' orbit," said Dawn Mission Director and Chief Engineer Marc Rayman, who's based at NASA's Jet Propulsion Laboratory in Pasadena, California.

According to Space.com, Dawn’s first mission in 2007 was to observe and explore the giant asteroid Vesta (which 326 miles wide) in addition to the nearly 600-mile wide Ceres.

"Both Vesta and Ceres were on their way to becoming planets, but their development was interrupted by the gravity of Jupiter,” said Carol Raymond, deputy project scientist at JPL. “These two bodies are like fossils from the dawn of the solar system, and they shed light on its origins."

"By studying Vesta and Ceres, we will gain a better understanding of the formation of our solar system, especially the terrestrial planets and most importantly the Earth," said Raymond. "These bodies are samples of the building blocks that have formed Venus, Earth and Mars. Vesta-like bodies are believed to have contributed heavily to the core of our planet, and Ceres-like bodies may have provided our water."