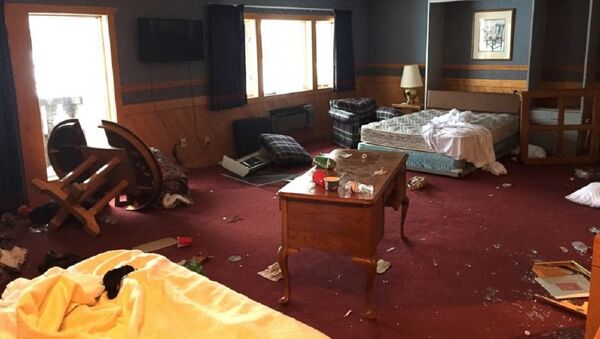 Members of a University of Michigan fraternity on a ski trip have apparently caused more than $400,000 in damages at a resort. The damage included broken tables and chairs, shattered windows, kicked in doors, ceiling tiles pulled down and trash strewn "everywhere." Around 45 rooms were wrecked.

The University of Michigan sanctioned the Sigma Alpha Mu fraternity for wreckage caused during heavy partying at Treetops Resort in Northern Michigan. However, some have called for criminal prosecution.

"Our chapter accepts full responsibility for this incident and we will be working with the management of the resort to pay for all damages and cleaning costs,” they said in a statement.

The frat has reportedly paid $25,000 in restitution but have also apparently denied liability, according to the resort’s owner, suggesting they are not likely to voluntarily pay the full $430,000 in damages.

Part of that may be the result of the initial estimate running around $100,000 that was provided to the fraternity. However, this weekend, the owner of Treetops told local media that after further investigation, the estimate has risen to the new larger number.

"If you just look at our out-of-pocket expenses, things we've paid to contractors, third parties, it's around $230,000,” Barry Owens said in an e-mail statement Saturday. “It doesn't take into consideration management time or damage to the resort's reputation. Our accountants and attorneys are saying that this could be up to an additional $200,000.”

University of Michigan President Mark Schlissel on Friday instituted the most severe sanction possible and barred the frat from campus for four years. He also requested that the fraternity's national council revoke the charter for the chapter.