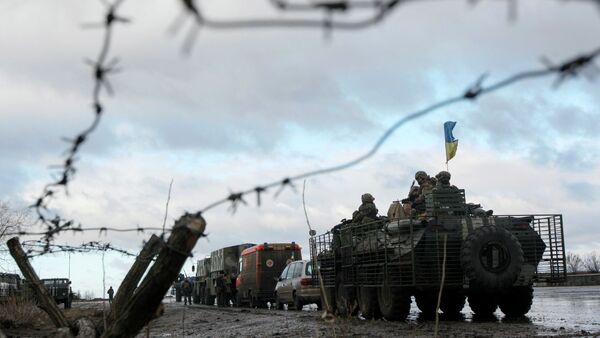 According to the self-proclaimed Donetsk People's Republic, Kiev is redeploying withdrawn heavy weaponry near the contact line.

"Unfortunately, DPR intelligence is spotting new cases of withdrawn Ukrainian units being redeployed [in] violation of Minsk agreements, 20-30 kilometers [12-18 miles] from the line of contact," Eduard Basurin said at a news briefing.

The official also flatly denied accusations that DPR was secretly turning back its large-caliber arms to positions from which they had been previously pulled away.

"These assumptions are untrue and cannot serve as justification for Ukraine's non-compliance with its obligations to withdraw weapons," Basurin said.

US to Send Arms to Ukraine Using Private Contractors - Hacker Group
Earlier in the day, Basurin, along with a self-proclaimed Luhansk People's Republic (LPR) official, told RIA Novosti that both DPR and LPR have completed heavy weaponry withdrawal in adherence to the deal with Kiev.

Basurin added at the briefing that his command passed on the details of the withdrawal to the Organization for Security and Co-operation in Europe's (OSCE) observers.

The agreement, dubbed the Minsk Accord, was signed after extensive talks on February 12 in the Belarusian capital. It specifies 13 measures to end the conflict in east Ukraine.

Worked out by the German, French, Russian and Ukrainian leaders, it includes the aforementioned pullback of heavy arms, a general ceasefire and an all-for-all prisoner exchange.

Sunday marks the 14th day since the ceasefire came into force and the last day of the large-caliber arms withdrawal envisioned by the deal.