Solidarity With Refugees: Thousands Gather for Antiracism Demo in Dresden 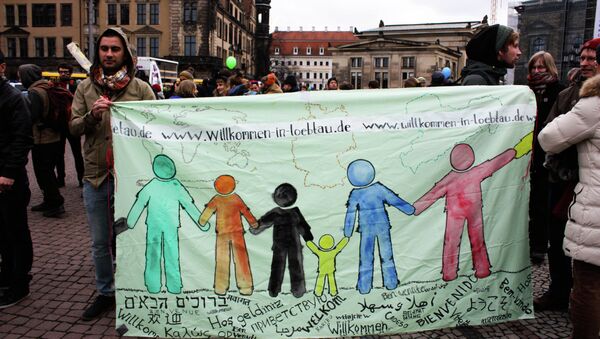 © Sputnik / Anastasia Raevskaya
Subscribe
The protest was designed to promote the idea of multiculturalism in Germany and contribute to the elimination of racism and discrimination.

Anastasia Raevskaya — Thousands of people gathered on Saturday in Dresden to demonstrate against xenophobia and racism, promoted by the German anti-islamization movement Pegida.

Anti-Islamist Pegida Vienna Calling for 'True Democracy'
Carrying balloons of different colors with the legend “Refugees welcome” and holding placards urging tolerance towards foreigners — students, refugees, representatives of various political movements and other activists crowded the city center to protest against discrimination and express their solidarity with people of various religious and cultural backgrounds.

The demonstration was organized by a nationwide social movement known as #NoPegida, which formed as resistance to the notorious right-wing group Pegida. Over the last few months, Germany has experienced a wave of anti-Islam sentiment, partly related to an increased influx of refugees from Syria and Iraq. Pegida or Patriotic Europeans Against the Islamization of the West was responsible for organizing anti-immigrant demonstrations, which have taken place all over the country since October 2014.

A hotbed of Pegida’s far-right activities is Dresden; anti-Islam demonstrations there constantly attract thousands of people. However, the counter-movement #NoPegida is also gaining strength in the city and other country’s regions, becoming increasingly popular among German residents from day to day.

“The spread of nazism is a common social challenge,” Michael, 25, a member of the ‘Students against Pegida’ movement, told Sputnik during the Saturday’s demonstration. “It should be addressed by all cities and nobody should be left alone.”

‘Students against Pegida’ is a part of #NoPegida movement. It is an alliance of young activists whose aim is to support the idea of multiculturalism at universities and promote anti-racism messages among students. Their activities include distribution of flyers and other informational material, organization of demonstrations as well as informational anti-discrimination campaigns in social networks.

Pegida Protesters in Newcastle Largely Eclipsed by Counter-Demonstrators
The Dresden protest was one of the largest demonstrations, in which young activists have taken part. The protest gathered people from all over the country, including foreigners and refugees.

“I think it is important that refugees themselves came here to the demonstration,” participant of the protest, Anastasia, 24, said. “They should show they are able to stand for themselves, to express their position,” she added.

“EU policy declares us, the refugees, to be illegal and therefore we are treated like criminals. But we are human beings just like you! We deserve the same rights as German citizens so that we can also participate in society as equals,” their appeal said.

According to German Federal Office for Migration and Refugees, the number of asylum applications in 2014 reached 202,834. The rate of asylum seekers rose in comparison to 2013 by 39% and is closely connected with the civil war in Syria and Iraq, as well as the Ukrainian conflict.