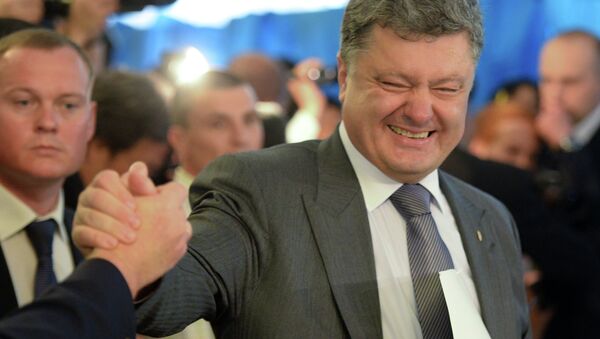 Ukraine’s President Petro Poroshenko twice promised to sell his Roshen confectionery corporation, but spent much of last year ducking that pledge by claiming it's difficult to find a buyer.

Berlin is Disappointed With Poroshenko’s Presidency - German TV Channel
Petro Poroshenko remains a “businessman and billionaire” despite an election campaign pledge made almost a year ago to sell Roshen, whose market value is estimated at  $1.5 billion, the German business newspaper Handelsblatt reports.

Poroshenko voiced his intention to spin off his business in two interviews with Bild newspaper.

In the first, given before his election as president, he gave a “solemn promise” to sell the corporation as soon as he would take office.

In the second, in November, when he already held the country’s top job, he assured Bild that the deal to sell Roshen would be inked very shortly.

Well, he is still selling it, with Handelsblatt quoting Italian banker Giovanni Salvetti as saying that the Ukrainian crisis is not the best time to sell.

“I hope the situation will get better in the first two quarters of this year,” Salvetti added.

Last year Roshen reaped in $1.4 million even as Ukraine’s economy crumbled amid the ongoing war.

Besides Roshen, Poroshenko also owns considerable bank and insurance company stock as well as Channel 5 television, which he refuses to sell arguing this would undermine national security.

Add to these shares of a shipbuilding company, a syrup-making factory and a fitness club and it would be hard to disagree with  Handelsblatt, which names the Ukrainian leader the country’s seventh wealthiest man.

The newspaper adds that, under the circumstances, Poroshenko should be working hard to make the internationally-mediated ceasefire hold.

“His very presidency now hangs in the balance: people hope he will give them peace and keep his promise,” the paper writes in conclusion.