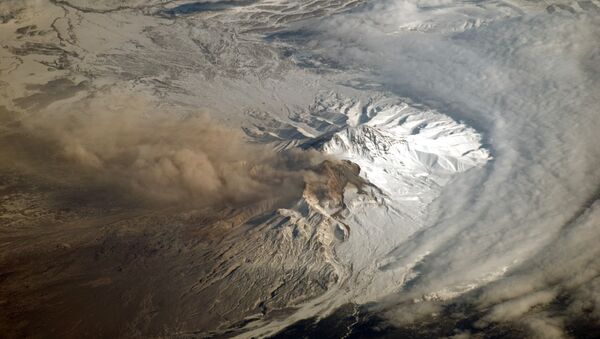 © AFP 2021 / NASA
Subscribe
One of three volcanoes, currently erupting in Russia's Kamchatka, produced a huge ash cloud that grounded flights in Alaska over the weekend.

Alaska Airlines was forced to cancel four flights between the cities of Anchorage and Nome, as well as between Anchorage and Bethel. The ash cloud, likely generated by restive Shiveluch, is expected to dissipate soon, meaning that no more flights will be grounded.

Shiveluch, one of the largest and most active volcanoes in the region, is notorious for its violent eruptions. On Saturday, ash plume rose to 9 kilometers (5.6 miles) altitude. On Sunday, the volcano spewed ash 6 kilometers (3.7 miles) into the atmosphere. The ash cloud poses no threat to air travel in Alaska or localities in Russia.

Earlier, in January, Shiveluch spewed ash that drifted to Alaska grounding several flights in the state.