Protesters Call for Resignation of Italian Gov't at Anti-Immigration Rally 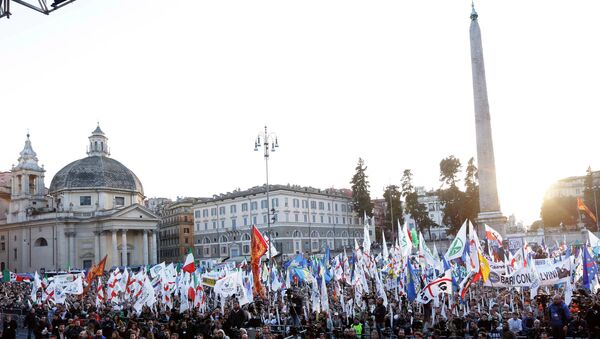 The demonstrators demand a crackdown on illegal immigration, Italy’s exit from the eurozone and prompt resignation of the government.

"[Italian Prime Minister Matteo] Renzi is just a pawn, a foolish servant of Brussels, who wants to destroy the Italian economy," leader of anti-immigration party Matteo Salvini was quoted as saying by Tgcom24.

The protest rally organized by anti-immigration right-wing party Lega Nord (LN), is taking place at one of the city’s central squares Piazza del Popolo. The demonstrators demand a crackdown on illegal immigration, Italy’s exit from the eurozone and prompt resignation of the government.

While the representatives of Lega Nord are speaking from the stage before the crowd, party’s leader Matteo Salvini is expected to deliver speech at the end of the protest campaign.

Italy’s Renzi Says It's Too Early for Military Intervention in Libya
The rally is held alongside with a march organized by LN opponents. Salvini said he did not fear that clashes may erupt after the demonstration is over.

Police in Rome increased security on Saturday after clashes with anti-LN activists a day earlier, who occupied the church of Santa Maria del Popolo. Italian Interior Minister Angelino Alfano said that prior to the Saturday protests some 4,000 police personnel were deployed in the city.

The protest by anti-immigration party Lega Nord comes before upcoming regional elections scheduled for May.

Recently, Italy has faced a massive influx of undocumented migrants from Libya, with hundreds of Africans coming to the country amid concerns of Islamic State advances.