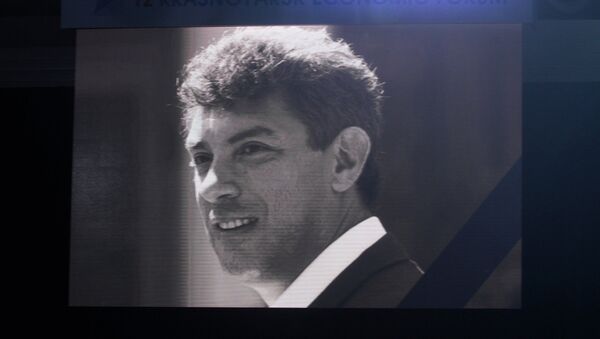 © Sputnik / Sergey Chernyh
/
Go to the photo bank
Subscribe
Murder of Russian politician Nemtsov may be used for attempts to increase Western hostility against Russia and even to motivate further serious sanctions, experts claim.

Who Mr. Nemtsov Was and Why He Was Killed
MOSCOW (Sputnik), Daria Chernyshova – Friday's murder of Russian opposition politician Boris Nemtsov in the center of Moscow could be used by the West as reason to fuel tensions and increase pressure on Russia, experts told Sputnik on Saturday.

“This provocation will be used for attempts to increase Western hostility against Russia and even to motivate further serious sanctions. I for sure have the feeling that the murder of Nemtsov is a direct consequence of the Minsk ceasefire agreement and its apparent success,” political analyst Jon Hellevig told Sputnik.

Hellevig added that a provocative killing was obviously needed “to fuel the flames”, suggesting that the killing could be a false flag operation of some Western special task forces.

“Of course, I cannot know for sure at this point, but the murder clearly bears all the hallmarks of such a staged murder complete with a careful choice of the scene of the crime on a bridge with the Kremlin, the Red Square and St. Basil’s cathedral – the symbols of Russia – in the background,” Hellevig added.

German MP Urges to Refrain From Sweeping Conclusions on Nemtsov’s Murder
The expert also said he expected that the international reaction to the murder would far exceed “the two earlier similar Western propaganda campaigns”, in what he meant murder of Russian journalist Anna Politkovskaya and the death of former Russian Federal Security Service (FSB) officer Alexander Litvinenko.

“One can't help but think that Nemtsov has been knocked off by those looking to cause instability in Russia and overthrow [Russian President Vladimir] Putin. Nemtsov while being opposition was not in anyway popular with the Russian public, nor was he a threat to Putin,” the analyst concluded.

Mitch Feierstein, hedge-fund manager and chief executive of the Glacier Environmental Fund Limited, agreed that Nemtsov’s murder could be a pretext to accuse the Russian president of some links to the killing.

“This cold-blooded murder opens the door for conspiracy theorists and media propagandists to summarily convict Putin, the West’s “boogeyman,” without any facts, evidence or a trial,” Feierstein told Sputnik.

Boris Nemtsov’s Killers Tried to Destabilize Russia – Gorbachev
Feierstein further said it was unlikely that the world waited for the results of an independent and thorough investigation before making “wildly speculative” conclusions. Instead, the expert argued that an increase in international and domestic tensions was likely to take place.

Boris Nemtsov, an opposition politician who served as Russian deputy prime minister and energy minister under the country's former President Boris Yeltsin in the 1990s, was shot at several times on Friday night from a bypassing car.

After the deadly shooting, a number of Western leaders, including US President Barack Obama, French President Francois Hollande and German Chancellor Angela Merkel expressed their condolences over the tragedy and urged prompt and impartial investigation into the case.

On Saturday, Russian investigators said that murder may have possible links to current events in Ukraine, Nemtsov's business activity and his stance on the Charlie Hebdo attack in Paris.