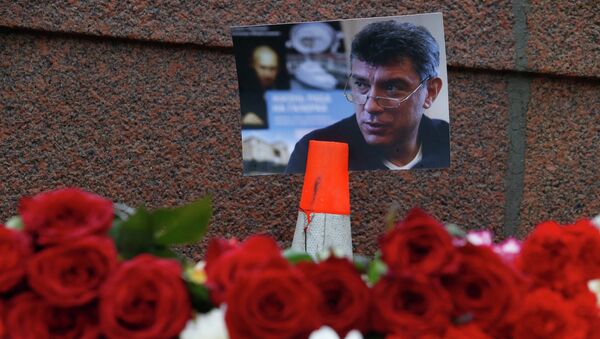 World leaders expressed their condolences to the family of opposition figure Boris Nemtsov, who was shot dead on Friday night in Moscow.

Russian Politician Boris Nemtsov Killed in Moscow
World leaders deplored the assassination of Boris Nemtsov, one of the most well-known politicians of Yeltsin-era Russia.

Russian President Vladimir Putin expressed his condolences to the slain politician’s relatives and ordered the Investigative Committee, the Interior Ministry and the Federal Security Service to set up a special investigative team. "Putin emphasized that this brutal murder has all signs of being ordered and is of an exclusively provocative character," Kremlin spokesperson Dmitry Peskov said.

Prime Minister Dmitry Medvedev called on law enforcement to do their best to find those accountable for the “brutal murder of the prominent politician”.

Boris Nemtsov was an outstanding individual and a man of principle. This is how we will remember him

US President Barack Obama condemned the “brutal murder” and called on Russia to conduct a transparent investigation into the crime.

Statement by the President on the Murder of Boris Nemtsov: pic.twitter.com/NqPmRcRhIO

French President Francois Hollande expressed his condolences to the family of Boris Nemtsov, a “courageous and tireless defender of democracy and a fierce fighter against corruption”.

Ukraine’s leader Petro Poroshenko said that killed Russian opposition politician Boris Nemtsov was a bridge between Russia and Ukraine that has now been destroyed. "He was a bridge between Ukraine and Russia. The murderers' shot destroyed that. I think it was not coincidental. I do not doubt that the killers will be punished. Sooner or later," Poroshenko wrote on his Facebook page and Twitter.

Shock. Borys was murdered. It is hard to believe. I have no doubt that murderers will be brought to justice. Sooner or later. Rest in peace.

PM: Appalled by callous murder of Boris #Nemtsov. A man of courage and conviction. His values will never die. http://t.co/WvFk4KyrSj

German Chancellor Angela Merkel was "shocked by the insidious murder" and called on Russia to bring the criminals to justice.

"Merkel extends her condolences to the family [of Nemtsov] and calls on President Vladimir Putin to facilitate a speedy investigation and to prosecute those responsible," a German government spokesman Steffen Seibert said in a statement.

Italy's President Sergio Mattarella addressed his condolences to Nemtsov's family and the people of Russia. The Italian leader expressed hopes that "the perpetrators of the heinous act will soon be brought to justice".

I condemn the murder of the #BorisNemtsov in Moscow. Transparent investigation needed. Sincere condolences to his family.

Former Yukos head Mikhail Khodorkovsky took Nemtsov’s death personally. “The death of Boris — grief for me and my family. We all loved him. Reckless, but a very nice guy”, he wrote on Twitter.

US Secretary of State John Kerry asserted that Nemtsov had committed his life to a democratic Russia, and to strong relationships between Russia and its neighbors and partners, including the United States. "His absence will be deeply felt in Russia and around the world," Kerry's statement said. "I am shocked and saddened to learn of the brutal murder of former Russian Deputy Prime Minister Boris Nemtsov in central Moscow”.

Sweden's Foreign Affairs Minister Margot Wallström asked the truth to be found and justice to be served.

March of protest in Moscow also becomes march of mourning. Opposition and journalists must be protected!

Condemn the murder of opposition leader Boris Nemtsov in Moscow. Those responsible must be brought to justice.

EU foreign policy chief Federica Mogherini said her thoughts were with the family of the "strong advocate for modern, prosperous and democratic Russian Federation".

Secretary General of the Council of Europe Thorbjorn Jagland was appalled by the murder.

I am shocked and appalled key opposition leader Boris #Nemtsov was shot. Killers must be brought to justice.

German Foreign Minister Frank-Walter Steinmeier said he was shocked by the "ruthless murder".

2/2 #Steinmeier cont'd: the assassins of @BorisNemtsov must be held accountable in transparent and lawful procedure.

FM #Steinmeier: Like so many Russians saddened+shocked by ruthless murder of @BorisNemtsov,we lost a fearless voice for an open Russia.1/2

His colleague Michael Roth, Minister of State for Europe, said that the violent act will not destroy freedom.

The murder of #BorisNemtsov is a horrible tragedy. Such an horrendous act won't never stop freedom. pic.twitter.com/3ixO1g04gN

In his turn, US Senator John Mccain tweeted he felt heartbroken by the murder of his friend Boris Nemtsov – “a voice for human rights in Russia.”

Boris Nemtsov’s Killers Tried to Destabilize Russia – Gorbachev
The assassination of Boris Nemtsov complicates the situation in the country, even destabilizing it by ratcheting up tensions between the government and the opposition, Mikhail Gorbachev, a former leader of the Soviet Union, said.

“Just who did this is hard to say, let’s not jump to any conclusions right now and give the investigators time to sort this all out,” he added.  Gorbachev did not rule out that the high-profile killing could encourage some people to urge the authorities to introduce a state of emergency which he said would only exacerbate what is already a difficult situation.

Nemtsov was a real patriot, who believed in the possibility of Russia's greatness. I cry now both for his family & the country he so loved.

Russian opposition blogger Alexey Navalny described the murder as "terrible tragedy and loss". "My most sincere condolences to his family, relatives, friends, well and all in general — we really lost something we can never make up for", Navalny wrote on Facebook. "I hope I'll be allowed to attend his funeral", Navalny said referring to his 15-day-long arrest.

Putin Considers Nemtsov’s Murder Provocation, Expresses Condolences
On Friday night, Boris Nemtsov was killed when several shots were fired at him from a car, while he was walking in central Moscow. Boris Nemtsov was 55 years old. He was born in Sochi. In 1985, he received his Ph.D in Physics and Mathemathics at the State University of Gorky. In 1991, Boris Nemtsov was appointed the governor of the Nizhny Novgorod Region. He also was a former deputy prime minister in the Russian government under President Boris Yeltsin. At one point he was considered a likely presidential candidate. Nemtsov co-chaired the RPR-PARNAS (Republican Party of Russia – People's Freedom Party) since 2012 and was also one of the leaders of the liberal Solidarnost movement. Since September 2013 and until his death, Nemtsov served as a member of the Yaroslavl Region's parliament.
Newsfeed
0
Access to the chat has been blocked for violating the rules . You will be able to participate again through:∞. If you do not agree with the blocking, please use the feedback form
The discussion is closed. You can participate in the discussion within 24 hours after the publication of the article.
To participate in the discussion
log in or register
loader
Chats
Заголовок открываемого материала